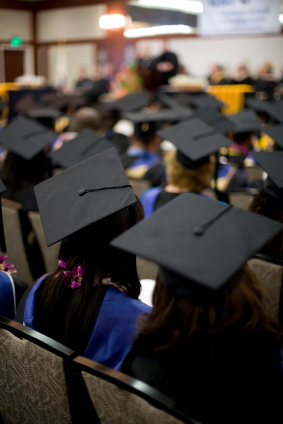 According to recent data from the Bureau of Labor Statistics, college enrollment is at a record high.

Over 70 percent of the graduating class of 2009 were enrolled in college last October, the highest number on record since the Labor Department began keeping track of such data in 1959.

Experts said the economy clearly played a role in the record college enrollment. "The consequences of dropping out of high school are much more severe today than they were, say, 30 years ago," noted Dan Bloom, who works for the New York-based research organization MDRC, in a speech at the Brookings Institution in Washington this week which was reported by The Wall Street Journal. "I think the main reason is that changes in the labor market. . .have dramatically decreased the availability of good-paying jobs for people who don't have any post-secondary education or training."

Zac Bissonnette, a financial writer for AOL's DailyFinance, points out that the data is not necessarily good news: A good portion of the new college students will very likely not graduate, and those who do may not hold jobs that are any better than the ones they might have taken without a degree.

Increased enrollment, argues Bissonnette, is primarily the result of recruiting students with poorer grades who are "unlikely to graduate with a degree that could provide a return on the investment." This could spell disaster for the majority of students who are deep in debt by the time they complete their postsecondary education.

"Secretary of Education Arne Duncan has been banging the drum for increased access to higher education, and that's commendable," Bissonnette writes. "But before we start trying to enroll more kids in college, it might be a good idea to make sure the ones who are already there are getting value out of it--and jobs when they graduate."