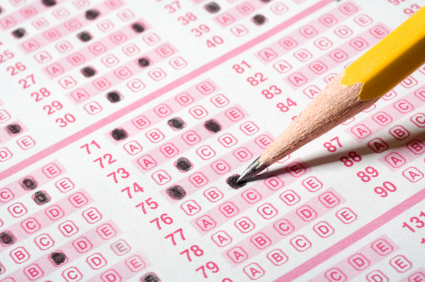 Advanced Placement courses are becoming more popular, but the number of students who fail the tests is also increasing.

USA Today reports that 2.9 million AP exams were taken last year--a record high--but more than two in five students earned a failing score of 1 or 2. The failures were more pronounced in the South, where just under half of all AP tests scored a 1 or 2.

AP courses, which are administered by the College Board, are college-level courses given to high school students that can earn college credit. But USA Today notes that the failure rates "raise questions about whether schools are pushing millions of students into AP courses without adequate preparation--and whether a race for higher standards means schools are not training enough teachers to deliver the high-level material."

The Las Vegas Sun illustrates a case in point: Several years ago, the Clark County School District added a fourth year of math to minimum graduation requirements, and students were urged to enroll in advanced classes. As a result, participation in AP classes grew from 5,675 in 2002 to 16,669 this year.

But the percentage of students who pass the exams has dropped: In 2009, 43.8 percent passed, down from 57.8 percent in 2002. Officials are concerned that some of the most challenging classes have become so crowded that the quality of instruction may be suffering. At the same time, they say that students must be better taught in prerequisite classes to prepare them for the tougher courses.

Darla Hall, director of K-12 policy development for the Washington-based think tank Education Trust, pointed out that some AP courses may not be challenging enough. "What needs to be a part of the conversation is whether students are really getting the rigorous, high-quality instruction and support they need to be successful," she was quoted as saying in the Sun. "Unfortunately, what we've found all too often is high school courses that are advanced in name only, and are watered-down curricula and weak instruction."

Others say the statistics are misleading. Jean Lord of the Southern Regional Education Board noted in USA Today that while Arkansas had the highest AP failure rate of 70.3 percent, it also increased participation from 11 percent in 2003 to 33 percent in 2008. In addition, the percentage of students who passed at least one AP exam increased from 6 to 11 percent.

In a related story, The Washington Post reports that AP exams are about to be revised to put more emphasis on conceptual understanding over memorizing content. Essay questions will focus on concepts, and multiple-choice questions will test analytic skill rather than memory. It remains to be seen what sort of an effect revamping the AP will have on the courses' failure rate.