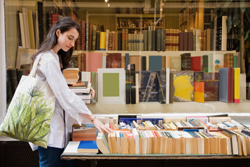 According to The Christian Science Monitor, textbook rental options are increasing as college students seek ways to reduce the expense. Recent reports cited in USA Today reveal a majority of students spend an average of $900 per year on textbooks.

The potential savings from textbook rentals could be significant--as high as 50 percent off the price of a new textbook. "One student came up to the register and saved $300...he was excited," says Lee Cobb, textbook manager at the University of North Florida's bookstore.

Students may treat rented textbooks as though they bought them, writing and highlighting in them. After the term ends, they can either return or buy the books.

The University of California Berkeley, which launched its Rent-a-Text program this year, leases about 30 percent of its 3,750 titles, per Mercury News. In its bookstore, a 600-page social psychology textbook, for example, which is about $140 new and $104 used, rents for $62.

Joe Turant, a New Jersey father who is paying for his incoming freshman daughter's textbooks, told USA Today, "If we can get them through rental, great. Otherwise, she's going to go online to try to find a lower price."

With online rentals, students search a textbook rental service's website for titles they want. Students then return them at the end of the semester. Some services, like eCampus.com, offer free shipping, according to PR Web. Chegg.com has 4.2 million titles available for rent and plans to partner with eight campus bookstores this fall, reports USA Today. Bookrenter.com has access to about 3 million books via its partnership with Amazon, The Christian Science Monitor reports.

Another alternative is purchasing or renting online digital or electronic textbooks, as they are often cheaper than new and used print versions. Barnes & Noble, for instance, lets students rent digital textbooks at a discounted price. Accessing these books requires the NOOKstudy application that must be downloaded to a personal computer or Mac. NOOKstudy lets students search, highlight and take notes in their e-textbooks.

Not all students, however, want to return their rented textbooks, reports Mercury News. Furthermore, those who want to keep their books may not want used ones. "(The rental) option doesn't let you build up your library, and that's what I want to do while I'm in school," says Anthony Rodriguez, a third-year UC Berkeley student majoring in intellectual history.