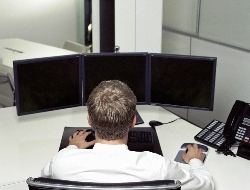 According to NPR, U.S. security officials say there is a severe shortage of people who have the sophisticated skill and knowledge needed to battle malicious cyber acts.

According to Gosler, there are currently 1,000 people in the U.S. with the necessary skill, yet government agencies and large corporations need a force of 20,000 to 30,000.

As a result, USA Today reported that the University of Maryland University College is offering a cybersecurity degree program this fall. The program, which is completely online, was designed to reflect the work done by the Center for Strategic and International Studies' Commission on Cybersecurity for President Obama. The group is comprised of various security and law enforcement officials and was created to construct a set of cybersecurity recommendations for the president.

Furthermore, there have been several recent calls to action to strengthen the nation's networks against potential attacks. NPR added that the Homeland Security Act of 2002 also established a dozen Centers of Excellence at universities around the nation. These centers were established to help the nation understand and analyze the various aspects of dangerous threats. A UMUC press release stated that the program is a direct response to the need for more military and civilian cybersecurity jobs worldwide.

So far, the program has been popular. When it was first announced this fall, more than 200 students applied, said USA Today. Dr. Susan Aldridge, UMUC president expects 1,000 to 1,200 students by the time classes start in the fall.

NPR reported that UMUC will also offer other security-related classes and so will other American colleges, such as Utah Valley University in Orem and Clarkson University in Potsdam, New York. More and more colleges are offering courses to teach students the skills needed to deal with natural and man-made domestic emergencies.

Gregory L. Shaw, co-director of the Institute for Crisis, Disaster and Risk Management at George Washington University, noted that the institute currently has more than 150 university-level emergency management programs, with another 30 in development or approved. In 1994, there were only four such programs.

Some members of Congress are also promoting a U.S. Cyber Challenge, reported USA Today. The challenge is a national talent search at the high school level that aims to find 10,000 young Americans with the potential to be the "next cybersecurity top gun". Senator Thomas Carper (D-DE) said the goal is "not only for [teams] to hone their skills on being able to hack into other systems...but also to use what they learn to strengthen our defenses". Last year's challenge was won by Michael Coppola, a 17-year-old from Connecticut. Now 18, he is working towards a career in cybersecurity.

"Be the Next Cybersecurity Top Gun," UScyberchallenge.org