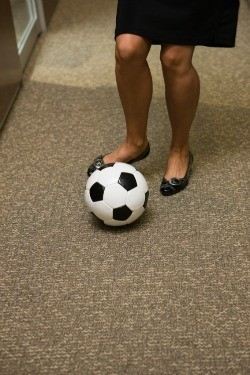 If you feel like your desk job has caused you to gain weight, a new survey from CareerBuilder suggests you are in good company: More than half of American workers describe themselves as overweight, and a solid share say they added at least some of those spare pounds on the job, reported a PR Newswire press release.

The survey, conducted by Harris Poll, included a sample of 3,022 full-time American workers across a wide breadth of industries and company sizes. In all, 55 percent of workers categorized themselves as overweight, and 39 percent said they gained weight at their current jobs. More than a fifth (21 percent) said they put on more than 10 pounds on the job, and nine percent said they added more than 20. Sixteen percent reported actually losing weight at work, while 45 percent said their weight remained unchanged.

When it comes to gaining weight at work, some survey respondents were more likely to gain than others. According to the press release, managers, workers ages 35 and up, and women were more likely to report gaining weight at the office than entry-level, younger and male workers. Information technology professionals reported a higher prevalence of weight gain than any other industry (50 percent), followed by government (48 percent), financial services (46 percent) and health care and professional services (42 percent each).

Many employers have already begun experimenting with creative ways to get employees moving and interested in health. According to Forbes, several companies have coordinated with Fitbit, a small startup that produces portable step-counting devices, as part of their corporate wellness programs. The device comes with sophisticated software that not only monitors employees' activity levels but can also stage friendly competition between offices or groups as a means of promoting exercise. Fitbit now sells its devices to thousands of employers at a discounted price, and according to CEO James Park, this is one of the fastest-growing segments of Fitbit's business. Forbes noted that companies collecting sensitive employee health data must typically work with third-party groups such as StayWell or Welltok, for privacy's sake.

Fitbit declined to comment on how wearable health devices might affect negotiations between employers and health providers, but health insurer Cigna told Forbes that they "may" have an impact on future group pricing.