Most Workers Are Not Saving Enough For Retirement 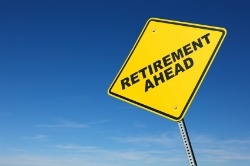 A new survey has found that just 14 percent of workers are very confident that they will have enough money to live comfortably in retirement.

The Employee Benefit Research Institute's 22nd annual Retirement Confidence Survey was based on responses from close to 1,270 workers and retirees ages 25 and up about their attitudes towards retirement. The study's results indicated that the majority of respondents have less than $25,000 in savings and investments. In addition, more workers said they were falling behind on saving for retirement.

"Americans' retirement confidence has plateaued at the lowest levels we've seen in two decades of conducting this survey," noted Jack VanDerhei, EBRI research director and co-author of the report, who was quoted in a press release.

By far, however, most respondents agreed that the greatest pressing financial issue facing Americans today is job security.

"They're nervous. They're worried," said Nevin Adams, EBRI director of education and external affairs, who was interviewed by The Baltimore Sun. "There is a lot of uncertainty out there."

The survey also found that a growing number of employees are expecting to work past age 70. As reported by Life Inc., a record 26 percent of those polled said they expect to be septuagenarians before they retire. Five years ago, only 16 percent of Americans said they would delay retirement that long. Moreover, in 1991, 84 percent of workers surveyed said that they expected to retire by age 65. In the most recent survey, that figure had dropped to 50 percent.

But experts have cautioned that many people are forced into retirement earlier than they expected because of health reasons, layoffs, or having to care for loved ones. In fact, while only 8 percent of respondents expected to retire before age 60, EBRI found that 40 percent of the retirees interviewed stopped working before that age, mainly due to job loss or illness.

"The point is you shouldn't count on working longer as the solution to your retirement savings issue," said Adams in The Baltimore Sun. "It may be that it's not something in your control."

The survey did yield some positive findings: Workers who participate in retirement plans, calculate how much is needed for them to retire, or who receive professional financial advice are more likely to feel confident about their retirement plans.