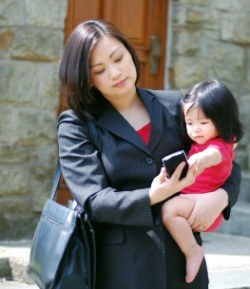 It is no secret that mothers pay a price in the workforce, both in terms of earnings and advancement, but the extent of this so-called "baby penalty" can vary from one industry to the next. Three researchers who have explored the trend extensively in academia have recently published their findings on the matter. The story that emerges is familiar, as it is one that favors men's professional careers, but not those of women.

Inside Higher Ed described the researchers' new book, "Do Babies Matter? Gender and Family in the Ivory Tower," as a comprehensive evaluation of gender, family and the academic environment. Using a mix of existing and new data, the authors analyze how parenthood affects male and female academics throughout the course of their careers. The conclusion: parenthood hurts female academics' careers, but can actually help those of men.

"Certainly our most important finding has been that family negatively affects women's, but not men's, early academic careers," co-researcher Marc Goulden, director of data initiatives at the University of California at Berkeley, told Inside Higher Ed. He said that women who do advance through the faculty ranks tend to have "much lower rates of family formation," and "higher rates of family dissolution." In men the effects of parenthood are neutral or net positive. These trends are consistent across the industry, but are especially prominent in the sciences where even single women tend to lag far behind men in earnings and advancement.

Co-researcher and UC Berkeley law professor Mary Anne Mason wrote in a column she penned for Slate that the academic "baby penalty" is evident right from the start: female graduate students and postdoctoral fellows with children receive little support from their universities, and may fall off the tenure track before ever really climbing on. Those who do achieve tenure have a long, difficult road to full professorship, Mason continued, and by the time mom-academics retire, they earn 29 percent less on average than men and have less retirement income to their names.

Part of the problem, suggested Mason, is that the critical period in academic careers tends to fall between the ages of 30 and 40, which is also a key time for family formation. At this age, women must often choose between children and their careers. According to PolicyMic, this interpretation is consistent with that of Princeton University academic and U.S. State Department official Anne-Marie Slaughter, who once wrote that she left her high-profile positions partly due to her family's needs. Slaughter said "having it all" is a luxury reserved for unmarried, childless women, or those who can afford to hire full-time nannies.

So, what is the solution? In her Slate column, Mason proposed structural changes to help level the playing field like paid family leave for both men and women, flexible workplace policies, pay equity reviews and child care assistance. She said women must also demand family policies to "at least give them a fighting chance to have both a successful career and babies."

According to Inside Higher Ed, "Do Babies Matter" was published earlier this month by Rutgers University Press. Mason and Goulden collaborated with Nicholas Wolfinger, an associate professor of sociology at the University of Utah.