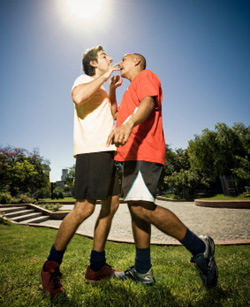 Longtime rivals, Cal and Stanford, may have started a new tradition. On Sunday, November 14 the two played their first Quidditch game on UC Berkeley's Memorial Glade.

Yes, that's right--Quidditch, the semi-contact magical wizarding sport featured in the best-selling Harry Potter series. As the Contra Costa Times described it, the Hogwarts' game is a cross between soccer, one-handed basketball, dodge ball and tag with flying brooms and magical balls.

Previously a fictional game played by wizards and witches, Quidditch has become the hottest sport on high school and college campuses, including Harvard, Yale, and USC. As The Stanford Daily reported, the non-magical land-based version started in 2005 at Middlebury College in Vermont with an intramural league that eventually grew into the International Quidditch Association (IQA).

The sport, still far from being considered professional but popular nonetheless, even has its own Quidditch World Cup, reported The Boston Globe. Last weekend, 46 teams and more than 700 players from schools such as Boston University, Emerson and Tufts gathered in New York for the fourth Quidditch World Cup.

Of the two West Coast schools, Berkeley was the first to form a Quidditch team. According to The Daily Californian, team founders Charlie Strauss and Hana Kwon were inspired after watching a Quidditch match on the East Coast. The two decided to form a team and held tryouts in February, where 36 students came out to show off their skills.

"[Charlie and I] both really like Quidditch and Harry Potter," said Kwon. "A lot of my friends are on teams on the East Coast. We figured 'Why not start a team here?'"

Sometime later, Stewart Macgregor-Dennis, a student at Stanford and Harry Potter fanatic, watched a YouTube video of the Berkeley team where, as he said, "the majority of it [was students] talking about... how they wanted to beat Stanford's Quidditch team", which at the time did not exist. "So, like any self-respecting Harry Potter fan who goes to Stanford, I felt like it was my duty to form the Stanford Quidditch team," he said.

Cal senior Jace Meierhenry channeled Gryffindor commentator Lee Jordan as he took to the microphone, reported the Contra Costa Times. "Don't worry about the applause. I hear it in my head constantly," he told spectators.

Cal co-captain Sean Robbins played the role of Snitch, the golden winged walnut-sized ball that the Seeker must capture to end the game. Robbins darted up and down hills with Stanford's seeker, Minh Nguyen, not far behind.

However, it was Cal's Donovan McNiff that triumphantly snatched the snitch. "I think my wrestling talents helped," he later said with sweaty hair and misty glasses.

Stanford demanded a rematch. "Next time, it's a home game," declared Mcgregor-Dennis.