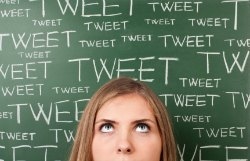 A new study out of Michigan State University shows that college students who use Twitter may earn higher grades and interact more with professors, students, and even academic sources, such as authors and researchers, according to an MSU news release. The study, "Twitteracy: Tweeting as a New Literary Practice," appeared in the the research journal Educational Forum.

Co-authors Christine Greenhow and Benjamin Gleason, both from the college of education at Michigan State University, analyzed existing research that looked at the use of microblogging and social networking in college classrooms. They found that students sending messages through Twitter as part of their learning were more engaged with content. They also discovered that sending 140-character tweets was creating a new way of writing.

"Tweeting can be thought of as a new literary practice," Greenhouse, an assistant professor of education, commented in the news release. "It's changing the way we experience what we read and what we write."

As part of the research, the authors discovered that the number of teenagers using Twitter doubled in less than two years, according to The Detroit News. They also estimated that the number of active users on Twitter is approximately 200 million and that these users are making more than 175 million posts every day.

Twitter, which was founded in 2006, has its own set of literary parameters. This includes making use of hashtags and shortened URLs in tweets, knowing how to re-tweet and even what to do to bring attention to a post. Twitter also helps some users communicate more concisely because of the character limitations in posts.

"One of the ways we judge whether something is a new literary form or a new form of communication is whether it makes new social acts possible that weren't possible before," Greenhow said in The Detroit News. "Has Twitter changed social practices and the way we communicate? I would say it has."

According to MLive, Greenhow learned more about the effect of Twitter by having students in one of her education and social media courses use it during class. Their posts were projected in live time at the front of the room. One result she discovered is that students who otherwise appeared not to be participating in class were actually doing so through their Twitter messaging.

"And then I could build on that idea in class and maybe encourage more participation in other ways," she said in MLive.

The research by Greenhow and Gleason followed a similar study out of MSU done by Jeff Grabill, according to the news release. That study revealed that freshmen preferred texting over any other type of writing style.