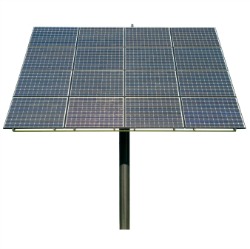 "[Students] like the look," said project leader Antonio Guerrero. "They like what it does. The idea is allowing students to connect with each other and just have a place to chat, become a community on campus."

How do they work? The array of photovoltaic panels on the Solar Dok's umbrella captures energy from the sun, which then passes through the stand, KGW News Channel 8 pointed out. The energy then gets stored in a battery that's housed in the table base. The solar power generated is off the grid and at no cost to the school or students.

Each Solar Dok is equipped with a digital meter that indicates how much solar energy is being absorbed and how much is being used. The tables, which cost about $10,000 apiece, only need a few hours of sun to become fully charged. They're expected to collect enough energy to power the outlets through a cloudy day along with the LEDs that light the tables during the night.

According to the manufacturer, EnerFusion Inc., Mt. Hood is the first community college in the U.S. to use these products.

"Being before UC Berkeley and Stanford and all of those huge amazing universities, it says something and it sets a precedent for what we're about," said William Miller, Associated Student Government president.

A Mt. Hood Community College web page noted that 1,200 recycled milk jugs were used in the manufacturing of the tables. The school also indicated that the student goverment allocated funds from student fees collected during spring term to purchase the Solar Doks as its legacy gift to MHCC.

"ASG saw the need for a more sustainable way of living," Miller was quoted as saying on the school site. "We are excited about the purchase and implementation of the Solar Doks and believe they will help everyone on campus to experience solar energy and hopefully discover other ways they can help sustain earth's resources."

Other benefits of the Solar Doks, the ASG indicated, include decreased usage of standard outlets, enhanced campus safety with the illuminated areas in the dark, utilization of recycled materials for a utilitarian purpose and publicity for MHCC as a leader in sustainable energy use. The school also notes that the tables are the first of their kind to be used anywhere west of the Mississippi River.