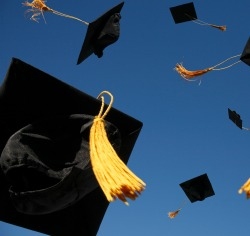 The current college dropout rate in America has become a national crisis, according to a PR Newswire press release about the recent American Dream 2.0 report. The report, funded through the Bill & Melinda Gates Foundation, found that 46 percent of individuals who enter a U.S. college don't graduate within six years. Its authors call for a change in the nation's financial aid system and a revamping of the $226 billion system that is already in place.

The report, endorsed by a group of college and foundation presidents, civil rights leaders, state legislators, college access advocates, and others, received funding from a grant to address the country's financial aid problem, reported The Huffington Post. This coalition producing the report came to a number of conclusions, the most contentious possibly being that financial aid should be linked to student outcomes, like student graduate rates. Currently, enrollment rates are a key factor in financial aid.

"At times over the last two decades it seems like we've been more comfortable doing nothing than doing something when it comes to improving federal financial aid," Jamie Merisotis, president of the Lumina Foundation and a member of the group that produced the report, told The Huffington Post. "But given the fiscal realities and the national imperative to increase postsecondary attainment, doing nothing comes at an increasingly higher cost to the country. Today's structure and delivery is based on enrollment, regardless of whether or not students complete."

This change toward financial aid based on student outcomes may be a tall order as a past attempt by the Obama administration to do so failed, Politic365 noted. In fact, the Obama administration looked to regulate some institutions through a gainful employment stance, but this only led to a lawsuit in federal court and in putting that regulation on hold, according to Politic365.

Some states, such as Indiana, Ohio, and Pennsylvania, however, have attempted to tie financial aid increasingly to academic outcomes, according to The Huffington Post. They are also looking to boost enrollment numbers of students traditionally "underrepresented."

In addition, the report discussed three other important recommendations regarding the country's financial aid system. The first recommendation was to make the financial aid system easier and more transparent, with research suggesting this alone could boost enrollment numbers. Secondly, the coalition wants to build support for different types of education delivery. These innovations could help lower costs for some students and better serve nontraditional students. Thirdly, the coalition wants schools, states and students to do their part in improving graduation rates and not compromising access or affordability for higher education in the process.

Authors of the American Dream 2.0 report argue that investing in more successful educational outcomes will ultimately pay off by lowering the long-term costs of education for students and institutions, while also strengthening the U.S. workforce. "Education is an economic issue," said Marc Morial, president of the National Urban League and member of the American Dream 2.0 coalition. "We have to build a more equitable system of higher education to make us more competitive in the world economically."