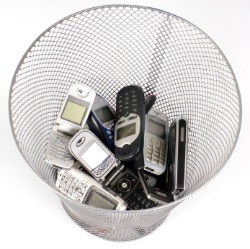 With so many tech savvy students, colleges and universities often run into issues getting rid of old electronics such as cell phones, computers and printers. One recycling company recently launched a nationwide program to help alleviate the problem.

According to a press release, Erie, Pa.-based recycling company FundingFactory announced the launch of COLLECTED, an electronic waste recycling program for higher educational institutions. The program is an expansion of its existing e-waste recycling program for K-12 schools. COLLECTED allows participating colleges and universities to send e-waste items such as inkjet and toner printer cartridges, cell phones, MP3 players, digital cameras and laptops to the company in exchange for cash or rewards. FundingFactory's website noted that these items can be sent in regardless of their condition. According to The Chronicle of Higher Education, institutions accrue points and can redeem them for items from the company's rewards catalog. Campus Technology noted that cash rewards vary, depending on the item. A list of qualifying items and current pricing can be found on FundingFactory's website.

"At a lot of universities -- unless they have a centralized program in place or some sort of waste-management policy through their facilities department -- it is really challenging to be able to recycle just about anything," said Jennifer Sellers, sustainability coordinator at Coastal Carolina University and a veteran professional in the recycling and waste-management industry, in The Chronicle of Higher Education.

The program is entirely free for higher educational institutions. FundingFactory supplies colleges with collection boxes and shipping labels. E-waste items are sent to the company's facility where they are then sorted. Items in working condition may be refurbished and sold to third-party resellers, while other items are broken down. Conor MacDowell, head of the COLLECTED program, told The Chronicle of Higher Education that 91 percent of what FundingFactory receives is reused in some way. About 9 percent is sent to another company that converts the e-waste into energy. Nothing is sent outside of the United States.

"It almost seemed like a no-brainer for us to get into this marketplace," said MacDowell in The Chronicle of Higher Education. "These schools and universities are really small cities."

In the past, the company has worked with higher educational institutions on a limited scale, but MacDowell said that, with the launch of COLLECTED, he hopes to reach some 500 campuses by mid-2014.

The program appears to be a win for all parties. As The Chronicle of Higher Education pointed out, it allows colleges to dispose of electronic devices in an environmentally conscious way -- and get money for it -- while also supporting the recycling and waste-management industry.

Drexel University's information-technology department has been sending ink cartridges to FundingFactory since 2002. The college's systems administrator, Jay Rappaport, noted that while it is nice to receive cash or rewards, he is most satisfied with the fact that the school has cut down on the harmful waste that makes its way to landfills.

"Any university needs to be a model for the general community itself, but also for the students," said Sellers to The Chronicle of Higher Education. "Universities have the perfect platform to be able to promote sustainability among its students, and then have them be the spokespeople when they get out."