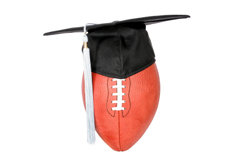 Recent data from the National Collegiate Athletic Association (NCAA) is diminishing the so-called "dumb jock" perception. According to the NCAA, the Graduation Success Rate, or GSR, for Division I student-athletes who started college in 2003 is at its highest, 79 percent. Although this rate is unchanged from the past two years, it has risen five points in the nine years of data collection and is higher than non-athlete graduation rates.

"The dumb-jock myth is just that," said Mark A. Emmert, new president for the NCAA, to The Chronicle of Higher Education. "It's a myth."

The Chronicle of Higher Education reported that female student-athletes graduated at higher rates than male athletes--87 percent for females versus 72 percent for males, a trend that has remained constant through the years.

Data also showed that men's basketball, football and baseball continued to have the lowest GSR among Division I sports. Men's basketball, which usually lags behind other sports in its GSR, reported a graduation success rate of 65 percent for players who entered college between 2000 and 2003. This is a one point increase from last year. While the NCAA reported progress in the Football Bowl Subdivision--an increase of three points in one year, to 69 percent--USA Today pointed out that the GSR in top-tier programs was not as flattering (67 percent).

Baseball, on the other hand, saw a slight increase from 69 percent last year to 70 percent, noted The Chronicle of Higher Education. Although Walter Harrison, president of the University of Hartford and chair of the NCAA's Committee on Academic Performance, praised high-profile sports for continuing to do well, he acknowledged that more still needs to be done in the sports of football and men's basketball. "That doesn't mean we should rest on our laurels. We've got a ways to go," he said.

According to the NCAA, the Graduation Success Rate was part of an initiative to more accurately measure the academic success of student-athletes. Unlike the federal government's methodology, GSR takes into account transfer and mid-year students for every sport. Similar to federal rate calculations, GSR measures graduation over a six-year period from initial enrollment. This year's report marks the ninth year of data collection and is the first year the data reflected the association's stricter academic requirements, which were adopted in 2003. The NCAA began collecting information from the entering freshmen class of 1995.