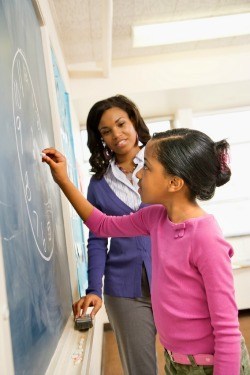 A national push to improve teacher preparation programs is gaining momentum. According to PBS, between 2011 and 2013, 33 states adopted new laws changing how teacher training programs are overseen or evaluated, and eight states added new academic standards for admission to such programs. While education reformists can call these shifts a victory, a new report suggested that when it comes to teacher training, the United States still has a long way to go. How far? By its measure, a full 80 percent of programs reviewed are mediocre -- if not downright failing.

The National Council for Teacher Quality released its new set of rankings evaluating the nation's teacher preparation programs, and, according to the report, the results are discouraging. Overall, only 20 percent of the 1668 programs reviewed rated above mediocrity. The report highlighted several more points of concern, including the fact that 23 states could not boast a single program that provides what researchers called "solid math preparation." Additionally, 1.7 times more elementary programs as secondary programs are failing, partly attributing to the lack of specialized elementary teacher training. Another red flag: Only one in four programs require applicants to rank in the top half of the college-going population, a standard the report called "modest."

"We have very low expectations," NCTQ President Kate Walsh told The Atlantic. "We've made teaching the easiest job to get into in terms of preparation, and yet it's one of the hardest jobs there is."

Though the NCTQ report garnered major headlines, not all education experts agree with the assessment. According to The Atlantic, many schools have argued that the rankings do not accurately reflect the quality of their programs since reviewers based ratings on paper materials, not on classroom observations. Timothy F.C. Knowles, director of the University of Chicago's Urban Education Institute, told Diverse: Issues in Higher Education that though assessing the quality of teacher preparation is "vitally important," the NCTQ effort "doesn't get us very far."

"There is an almost total absence of attention to things that matter -- like where teachers teach, how long they stay, measures of instructional quality or the extent to which students from particular programs actually learn," Knowles stated. "Until we focus on outcomes we are unlikely to move the needle very far, if at all.

Perhaps this sentiment explains why so few programs actually cooperated with the NCTQ. According to The Atlantic, 90 percent of the programs listed in the report opted not provide the organization with requested documentation, such as coursework, selectivity and student teaching requirements. In order to compile its rankings, the NCTQ had to find creative ways to get those materials, including placing ads in campus newspapers offering students cash in exchange for their course syllabi. The going rate for a single course syllabus was $25, noted The Atlantic; student teacher's handbooks net closer to $50.

Still, not all news was bad. The report highlighted a trend toward improving teacher quality in several states and praised efforts to provide candidates with instruction in classroom management, an area it said new teachers frequently find challenging. Three states shined above all others when it came to well-rated programs: Ohio, Tennessee and Texas.