Nearly 90 Percent Of Graduates Say College Was Worth It 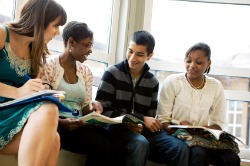 Astonishing higher education officials across the country, survey results released Monday showed that nearly 90 percent of young alumni were satisfied with their undergraduate experience, deeming it worth the time and money spent to obtain their degree.

The American Council on Education administered a survey asking four hundred randomly selected alumni between the ages of 25 and 39 whether they thought their college experience was a worthwhile investment, The Chronicle of Higher Education reported. Twenty-two different colleges and universities participated in the study.

Aside from the general satisfaction alumni expressed regarding their undergraduate careers, 85 percent of graduates said their education had prepared them adequately well for their current jobs. Eighty percent of alumni said they would attend the same institution, though students from four-year institutions were more likely to say so than their two-year counterparts.

With more than 2.4 million students receiving undergraduate degrees in the U.S. each year, college officials who were surveyed said they were delighted by the overwhelmingly positive responses of graduates.

"For something that takes this much time and this much money, it still draws a nearly unanimous declaration of its value," said the council's president, Molly C. Broad.

In a press release, New York University President John Sexton, who serves as chair of the council's board, said he was pleasantly surprised by alumni responses, but urged educators to uphold the high standards set by the survey's results.

"These numbers speak to the excellence of American higher education," Sexton said. "Even in a time when there is a lot of national dissatisfaction, there is still confidence in our institutions of higher education. For college leaders, that should be a source of pride, but never complacency..."

Respondents were also asked to comment on what they thought was the most important role of colleges and universities. Thirty-one percent of alumni answered "teaching students how to think critically," while 28 percent selected "preparing students for employment."

Even with the rise in enrollment costs in recent years, 76 percent of graduates said they "thought their institution charged them a fair price for their college education," according to The Capital Times. At the University of Wisconsin system, where tuition has increased by an average of 9 percent over the past decade, a stunning 92 percent still said educational costs were reasonable.

"The average elected official would kill to have such a positive rating as we have in higher education," Kevin P. Reilly, president of the University of Wisconsin system, told The Chronicle of Higher Education.