Harris Poll: Nearly Half of Unemployed Not Looking for Work 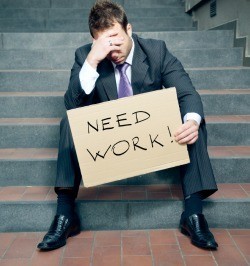 A poll conducted in April recently showed an overall lack of optimism about the career opportunities of the unemployed. The poll, which was conducted online by Harris Poll for Oklahoma City-based staffing firm Express Employment Professionals, surveyed 1,500 U.S. adults age 18 and older who have been out of work for various lengths of time. The Wall Street Journal reported that, among those polled, 47 percent admitted that they had "completely given up on looking for a job" altogether. Out of those who responded to the survey, 45 percent blame the economy for their situation, 36 percent blames themselves, 19 percent blamed their most recent boss, and 18 percent blamed the government.

Regardless of who is to blame for their unemployment, the fact remains that prolonged periods of unemployment can be disheartening. In fact, 82 percent of those polled agreed with the statement that they are "becoming more discouraged the longer [they are] unemployed," according to The Daily Caller.

However, that doesn't tell the whole story. Part of what could be holding people back, noted The Daily Caller, is that a percentage of those without a job continue to receive extended unemployment benefits. Democrats and Republicans have gone back and forth on the issue, with Republicans arguing that they provide a disincentive to finding work. Poll results seem to indicate that they could be right. In fact, 82 percent of those who receive the benefits admitted that they would search "harder and wider" if their benefits were ever cut. Sixty-two percent of those polled also stated that receiving unemployment benefits had allowed them to take time for themselves.

Whether it's related to unemployment benefits or not, the fact that so many unemployed individuals aren't actively looking for employment has many worried about the state of the economy and the future of the job market.

"When I see that 47 percent of unemployed Americans agree that they have given up looking for work, I'm shocked because that suggests the economy is much worse than many people realize" Bob Funk, CEO of Express and a former chairman of the Federal Reserve Bank of Kansas City, said in a press release quoted by The Daily Caller.

According to the Los Angeles Times, the national jobless rate fell to its lowest level since 2008 last month, at the same time that the nation added 288,000 new jobs. However, it's possible that the jobs being created aren't a good match for the long-term unemployed or are geared toward people with specific skills. The Harris poll also indicates that, in many cases, those without a job might actually be holding themselves back. According to the poll, almost two-thirds of respondents weren't willing to go back to school to learn more skills or become more marketable, 44 percent were unwilling to relocate, and 36 percent admitted that they spent less than five hours searching for a job the week before.

Donna Partin, who owns three cleaning company franchises in Pennsylvania, told the Wall Street Journal about the difficulties she has faced when trying to expand her 45-person workforce, despite the fact that she posts job ads online and in local newspapers. According to Martin, the unemployed might need to adjust their expectations if they want to find work, at least at first.

"They expect to come back into the work force at the same level as before and that's not reality," Partin said.

"For Those Out of Work, Scant Optimism in Finding the Next Job, Poll Finds," blogs.wsj.com, May 21, 2014, Brenda Cronin, http://blogs.wsj.com/economics/2014/05/21/for-those-out-of-work-scant-optimism-in-finding-the-next-job-poll-finds/

"Nearly half of unemployed not looking for work, poll finds," latimes.com, May 21, 2014, Tiffany Hsu, http://www.latimes.com/business/money/la-fi-unemployment-poll-20140520-story.html

"Poll: Nearly Half Of Unemployed Have Stopped Looking For Work," dailycaller.com, May 21, 2014, Chuck Ross, http://dailycaller.com/2014/05/21/poll-nearly-half-of-unemployed-have-stopped-looking-for-work/

Career and Education News
Home >
News>
Harris Poll: Nearly Half of Unemployed Not Looking for Work