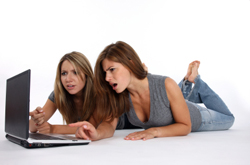 Breaking up has always been hard to do. Now a days, however, communication outlets such as Facebook, text messages, Twitter, instant messages and e-mails, seem to make it even harder. According to The Chronicle of Higher Education, Ilana Gershon, an assistant professor of communication and culture at Indiana University at Bloomington wanted to find out exactly how people, particularly college students, use new media to end relationships.

Gershon's new book, "The Breakup 2.0: Disconnecting over New Media", explores the new rules for dating that media has created. "I was interested in the ways in which people were using new media to break up with each other and also the ways in which new media--which is designed to create connections--creates all sorts of problems when you're using it to disconnect," said Gershon in a press release.

Gershon interviewed 72 people, 67 of which were Indiana University undergraduates. The author told The Vancouver Sun, "Students are sophisticated social analysts of new media. They put tremendous amount of thought and care into how they use every new technology, and worry all the time about how technology is shaping their lives." She added," I wrote this book for undergraduates, because I wanted to explain complex theoretical issues in an accessible and compelling way for them."

According to the press release, students' stories were complex--not only were students breaking up via Facebook, e-mail or text message, but they also did a lot of "media switching" to understand exactly what went wrong in the relationship or to follow their former lovers' lives. "What I find really interesting about the break-up is that they were really detective stories," Gershon explained. Later, she added, "[Electronic media] makes it easier to stay obsessed and stay mired in the goings-on of your ex."

The Vancouver Sun reported that relationships evolve in a series of stages--Facebook contact indicated casual interest, followed by texting, which was more personal. Talking on the phone was even more serious and the final stage was making the relationship "official" on Facebook.

This public announcement, however, created many problems when it was time to end a relationship. Who gets to announce the break-up first, the dumper or the dumpee? According to the press release, one student's friends found out she was single via the Facebook news feed before she even knew she had been dumped. Furthermore, what does one do with the traces of a relationship--the photos, Facebook wall posts and special ringtones? "People used to have to make similar decisions--do you burn the letters or not? But now they are making decisions about traces that they might encounter on a daily basis whenever they contact other people, not just the ones they can stick in a box somewhere and decide about it later," said Gershon.

Students discussed not only couple relationships, but friendships as well. While some students thought "defriending" people on Facebook was acceptable, others saw it as a "sign of hostility".

According to The Chronicle of Higher Education, Gershon argued that the biggest problem may be that developers of new media are not teaching their audiences proper social etiquette, or "netiquette". She cited the example of Thomas Edison standardizing "Hello" as the appropriate telephone greeting and stated that if we had gone with Alexander Graham Bell's suggestion, "Ahoy", the nature of phone calls today would probably be very different.

So what is Gershon's advice to college students? According to the press release, she said, "There's only one rule that I really feel comfortable with after all my interviews, which is don't share passwords. If you're sharing passwords, change them the minute you think a breakup is about to happen."

"For Students, Breaking Up Digitally Is Hard to Do," chronicle.com, September 21, 2010, Paige Chapman