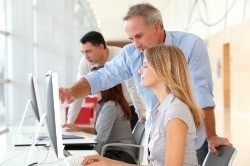 Internships have generated a lot of press lately, as recent cases have highlighted how little federal law protects many of these workers, and how little they are often paid -- if at all. At least some of this is about to change in New York City, thanks to a new City Council bill aimed to protect unpaid interns from sexual harassment and discrimination based on race, religion and sexual orientation. The law is just the latest development in a national movement by state and local governments, colleges and employers to support interns' rights and ensure a fair wage.

The new legislation passed by the New York City Council last week was drafted in response to a case last October in which a federal judge dismissed an intern's sexual harassment claim against her boss, reports The Huffington Post. According to the judge, protections under the federal Civil Rights Act did not extend to unpaid interns because the U.S. Equal Employment Opportunity Commission specifically defines "employees" as paid workers. The new bill rejects this idea and extends legal protections to all interns, regardless of pay.

"We had to close a loophole that was so big we could drive a truck through it," Councilman Jimmy Vacca (D-Bronx) told the New York Daily News.

The legislation places New York City beside Oregon and Washington, D.C. on the list of jurisdictions that have specifically protected unpaid workers against harassment, reported The Huffington Post. California Assemblywoman Nancy Skinner introduced similar legislation in California in January, but it remains in committee.

Other organizations in New York have made efforts to improve conditions for unpaid interns, as well. New York University recently implemented a stricter approval process for potential employers who want to recruit its students for internships. Columbia University, meanwhile, has stopped undergraduate registration credits for internships, a move Newsweek interpreted as an attempt to pressure employers to pay interns.

The New York Times Editorial Board openly commended institutions such as NYU and Columbia for their efforts to protect internships paid only in academic credit. The Gothamist, however, labeled the article as hypocritical, considering The Times itself still offered academic internships to young journalists that paid roughly $3.85 an hour, far below minimum wage. The New York Times quickly rectified the issue and announced that its interns will now receive $8 an hour for their time. Those who have already accrued unpaid hours this semester will be given back wages.