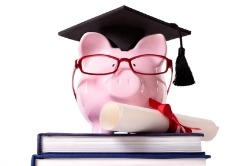 A new online database launched by the State Council of Higher Education for Virginia may help students project how much a college degree is worth, looking at both the academic major and the institution. According to the Richmond Times-Dispatch, supporters contend that the system could help curb student debt -- which is approaching $1 trillion nationally -- and could serve as a blueprint for similar programs nationally.

The Virginia Longitudinal Data System tracks the post-graduate salary outcomes for students who have graduated from public and nonprofit private colleges in Virginia since 1999. The Richmond Times Dispatch notes that the database only includes information for graduates working full-time in Virginia in positions that must be reported to the Virginia Employment Commission. The system -- seven years in the making -- does not include data for workers who have left Virginia or for graduates of private, for-profit educational institutions.

The Washington Post reported that despite its shortcomings, the data the VLDS provides is a matter of interest to parents and lawmakers alike, especially considering college costs. Legislation introduced in the U.S. Senate this year called the Student Right to Know Before You Go Act seeks to tie the outcomes of different degrees to their financial returns post-graduation.

"Students and their families should have this information at their fingertips so they can make better-informed decisions about where to enroll, what to major in and how much debt they might comfortably take on relative to their likely earnings," Mark Schneider, vice president of the nonprofit American Institutes for Research, told Congress last month, as reported by The Washington Post.

Tom Kramer, executive director of the student advocacy group Virginia21 and a College of William and Mary graduate, supports the new system. "I think this kind of information is vital," Kramer told the Richmond Times-Dispatch. "For this generation of young people, it's never been more important for us to have better data."

Among those who stand by the program and the information it provides is Grover "Russ" Whitehurst, a Brookings Institution analyst and a senior education official during George W. Bush's administration. "The most important thing government can do to increase productivity and innovation in higher education is to let people actually shop," Whitehurst told The Washington Post. "It is revolutionary."

The program is not without its critics, however. Peter Stearns, provost of George Mason University, told the Washington Post: "My biggest fear is that people would rush to premature conclusions about the value of a particular degree. You sort of want a view that would have whole careers in mind. There's more to a job than income."

Tracy Fitzsimmons, president of Shenandoah University, worries that the data would misrepresent schools in the eyes of potential applicants. "It's hard not to make judgments when you look at raw data like that," she told the Post. "I wouldn't want students and their parents to choose an educational institution, or even a career, based solely on projected earnings."