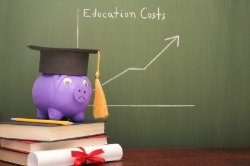 Although President Obama recently signed a highly publicized deal that kept Stafford loan interest rates from doubling for another year, borrowers will still see their payments rise in the long run.

"In the last year, Congress has actually trimmed tens of billions of dollars in student aid," explained Joel Packer, executive director of the Committee for Education Funding, who was interviewed by NPR.

He noted that graduate students will now have to pay interest on their loans while still in school. Meanwhile, a six-month interest grace period for all students following graduation will be eliminated -- meaning that students will have to begin repaying their loans immediately after they finish school.

"That's disappointing because Congress shouldn't pay for one education program by cutting another -- in this case it's actually cutting the same one," Packer told NPR.

Because of the elimination of the interest grace period, students should start thinking about repayment options before they graduate. Those eligible for Income-Based Repayment or Public Service Loan Forgiveness, for example, can avoid interest entirely if they enroll in time.

"It really underscores the need for students to think about their repayment options and getting into the right repayment plan before they leave school," said Pauline Abernathy, vice president of The Institute for College Access and Success (TICAS), who was quoted by U.S. News & World Report. "If they're able to get in the right plan, they won't necessarily accrue any interest during the time period."

Packer added that lawmakers also limited the number of semesters that students can receive Pell Grants, and made it more difficult for students to qualify for the maximum reward. As a result of all the education cuts, NPR noted that students will be paying an estimated $18 billion to $20 billion extra over the next decade.

Those costs have significant ramifications for student borrowers. As Reuters reported, according to John Ulzheimer, head of consumer education for SmartCredit.com, the changes to student loans are forcing borrowers to have what he terms an "economic come-to-Jesus moment" about whether their degrees are worth the cost.

Such is the case for Bryce Freeman, a student at the University of Florida at Gainesville, who told Reuters that the change to graduate loans will impact which schools he considers to be affordable for a master's degree in public policy.

"That's the million-dollar question," he said. "You have to find a balance between a program that's going to get you a good paying job and one that makes sense financially."