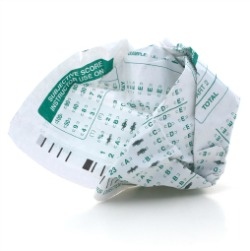 After more than a decade, the General Educational Development test was revamped and the new version unveiled last week, prompting some states to make changes in the way they administer high school equivalency exams.

As reported by the Los Angeles Times, the new GED has eliminated pencil-to-paper test sheets and is now computer-only. Additionally, the exam is said to be more rigorous, with greater emphasis on college and career readiness than just high school equivalency.

C.T. Tuner, senior director of public affairs for GED Testing Service, told the Santa Cruz Sentinel that the changes reflect the skills and knowledge that GED graduates need in order to be successful in today's job market. Furthermore, it is more aligned with national standards for K-12 and adult education, which focuses more on higher-order thinking.

"High school equivalency is great, but it's not enough to keep up with what most jobs are requiring," said Turner in the Santa Cruz Sentinel.

Some worry that the tougher exam will result in fewer test takers, however. Marty Finsterbusch, president of ValueUSA, a nonprofit organization that advocates for adult students, told the Los Angeles Times that there needs to be more resources, training and education for test takers so that they are prepared for the tougher content.

"I've come to believe that the reason for [the change] is to reflect Common Core standards. I think educators are concerned that students' performance will suffer due to unfamiliarity with Common Core," explained Williams.

She speculated, however, that a decline in test takers is likely to be temporary.

"As far as impact, just like anything else, there may be a dip in sheer number of testers until popular guides and resources are created to guide students, but I don't see a huge change in the fact that many students with non-traditional backgrounds will go the GED route," said Williams.

According to the Los Angeles Times, some states have, however, decided to stop offering the GED or will begin offering multiple options to adult test takers. Massachusetts is one such state. WBUR reported that Massachusetts education officials announced last week that they would offer a new exam created by the Educational Testing Service called HiSET. The HiSET will be available in both paper and computer versions and will phase in the more rigorous national career and college readiness standards instead of introducing them all at once as the new GED does. J.C. Considine, Massachusetts Department of Elementary and Secondary Education spokesperson, told WBUR that introducing the new standards all at once could be a "potential pitfall" and that the HiSET model would give adult students the time they needed to become familiar with the changes.

According to the Los Angeles Times, other states that have dropped the new GED include Iowa, Montana, Indiana, Louisiana, Maine, West Virginia, New York, Missouri and New Hampshire. California currently offers the new GED, but the state is expected to reassess its options in March.