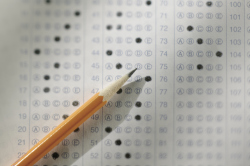 Research for the test enhancements began in 2007. Della Bradshaw at the Financial Times, reported that 750 faculty from around the world were involved in the process. Bloomberg Businessweek adds that faculty wanted a section that simulated the skills MBA students would use in the classroom, which have shifted towards problem-solving and critical thinking in recent years.

According to Inside Higher Ed, the new "integrated reasoning" questions will replace one of the two GMAT essays and will ask test-takers to interpret data from spreadsheets, charts and graphs. The answers will be multiple choice, but there will also be multiple correct answers. Test-takers will be asked to list all correct answers. GMAC says the new section "will provide business schools with a window into how prospective students respond to the kinds of complex challenges they will encounter as managers in today's information-rich business environment."

The new section will be scored separately and will have an audio component for some questions, which will help schools assess students' auditory learning styles. Bloomberg Businessweek says GMAC spent more than $10 million to develop the new questions. The alteration is the biggest makeover the GMAT has seen since it switched to its computer-adaptive format in the late 1990s. "It's a dramatic shift. These questions are really microcosms of what goes on in the MBA classroom, and it will help schools identify students [who] will thrive in the classroom, not just survive," said Dave Wilson, president and chief executive of GMAC. However, despite these changes, the time of the test will still be 3.5 hours and the current verbal and math sections will remain unchanged.

Although the change does reflects GMAC's commitment to improving the GMAT, many feel that it is also a response to the revisions the Educational Testing Services (ETS) made to its Graduate Record Examination (GRE). In recent years, ETS has convinced a number of business schools--including Harvard, Wharton, Stanford and MIT--to accept their test as an alternative to the GMAT. Inside Higher Ed points out that the GMAT has never stressed economics or accounting or any other business school specific skill set, which allowed the GRE to become a competitor among B-schools. Many experts feel GMAC's shift is a smart move. "They are trying to distinguish themselves and be less of a generalist test," says Chad Troutwine, CEO and co-founder of Veritas Prep, a high-end test-prep service for the GMAT.