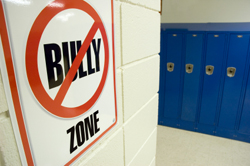 New Jersey lawmakers passed a bill on Monday that would require schools to have a more pro-active role against bullying and harassment both on and off school grounds. The bill was introduced late last week and move quickly through the Senate and the House of Representatives.

The measure has been in the making for months, but garnered more attention and support after the suicide of a Rutgers University freshman in September, noted NJ.com. Tyler Clementi jumped to his death from the George Washington Bridge after his roommate allegedly streamed an intimate encounter between him and another man online.

"I'm certain that this highlighted the urgency [of the bill]," said Assemblywoman Valerie Vainieri Huttle (D-Bergen), one of the prime supporters of the Anti-Bullying Bill of Rights.

The bill passed the Assembly 71-1, with 5 abstentions, and 35-0 in the Senate. It will now be sent to Governor Chris Christie for approval. Christie spokesman Michael Drewniak did not say what the governor planned to do. "The bill moved very quickly through the legislature, so we will just want to review it closely," he said.

NorthJersey.com reported that the anti-bullying measure would fill in the gaps of a 2002 law that encouraged schools to set up anti-bullying programs but did not require it. Huttle and other supporters of the bill said the new law would clearly state what schools should be doing about bullying and would show that New Jersey has "zero-tolerance" when it comes to bullying of any kind.

"We're sending the kids a message that there is hope they will have a safe place to learn," said Huttle.

According to NJ.com, the measure mandates that public high school employees go through training so that they can identify bullying and properly review complaints. Superintendents would have to report all incidents of bullying--in and outside of school--to the state Board of Education, which would then grade schools and districts on how they handled cases. If approved by Gov. Christie, it would give New Jersey the strictest anti-harassment statute in the nation.

"This bill reflects the public's increased awareness of the need for a renewal of values of respect for human dignity and personal privacy, particularly for young people in this time of rapidly evolving technology," said Clementi's family in a statement issued through their attorney.

The measure, however, was more lenient on higher education. Public colleges and universities would only be required to include a policy on bullying in its code of conduct.

Deborah Jacobs, executive director of the New Jersey ACLU, told NJ.com that the bill was "90 percent good". She noted that it would be unconstitutional to give school officials the authority to discipline students for bullying that takes place off school grounds.

According to The Associated Press, social conservative groups strongly oppose the bill and argued that passing it could result in unwanted repercussions regarding gay marriage. Public-interest groups, such as the New Jersey Family Policy Council, plan to challenge the law if it is approved.