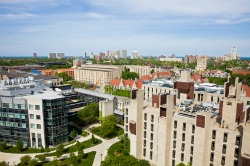 The University of Chicago opened what some are calling the library of the future earlier this week. At a time when many universities are moving volumes to off-site storage locations, including the University of Texas at San Antonio, Stanford University and the University of Denver, Chicago is going a different direction--underground.

Inside Higher Ed reported that the new Joe and Rika Mansueto Library, designed by Chicago architect Helmut Jahn, has eliminated the overcrowded, unsightly, dim stacks that are well-known in college campus libraries to make room for a spacious reading room and preservation and digitization center. However, the library will still maintain the convenience of having volumes on campus by storing them in an underground facility that is large enough to house 3.5 million volumes.

"Reality shows that you cannot do your research well having materials off-site," explained Judith Nadler, university librarian. "The cost of what you would give up in terms of research, studying, and teaching outweighs the cost of the building."

Insider Higher Ed noted that the university spent almost a decade working with faculty members and librarians before coming to a final decision. Many faculty members, like most on other campuses that have moved their books to storage, argued that moving volumes off-site would eliminate their ability to peruse the stacks and, therefore, harm their research capabilities. As a result, the university opted for underground automated stacks that are seven times more compact than traditional bookstacks and eliminate the need to move books off-site, reported Forbes.

According to Wired, from the outside the library looks like a "half-buried crystal Faberge egg". Instead of an intrusive box building, the Mansueto library is dome-shaped and covered with 700 panels of glass that allow natural light to stream in. Under the dome is the reading room and preservation and digitization center. The Chicago Tribune raved about Jahn's ambitious design, calling the library luminous and inspiring. However, what makes this library unique is its underground storage and retrieval system. From an aboveground computer terminal or via the Internet, patrons can request materials. A high-speed robotic crane then finds the bin in which the resource is located, pulls the bin and delivers it upstairs where a real person picks the book out--a process that takes about five minutes.

Though an innovative idea, Inside Higher Ed noted that not all campuses can afford such a solution. According to the Chicago Tribune, the Mansueto library was an $81 million project and $25 million came from University of Chicago alumni Joe Mansueto, chairman of Morningstar Inc., and his wife Rika, whom the library is named after. While costly, the underground facility should save the university in energy bills as it minimizes the need to regulate aboveground temperature to maintain and protect books. Furthermore, Inside Higher Ed noted that the automated retrieval system will not require additional staff or security and the university will save on transportation to an off-site facility.

"Beneath this bubble, a book-storing marvel; Jahn's ambitious design for new Mansueto Library will prove good for students as well as their research material," featureblogs.chicagotribune.com, May 18, 2011, Blair Kamin