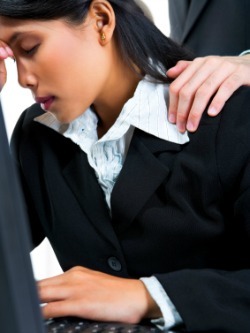 If you're experiencing workplace depression, you may have your boss to blame. This is courtesy of a new Danish study that claims unjust members of management cause workplace depression, anxiety, and stress in employees. To reach this conclusion, researchers handed out 4,500 questionnaires to workers at schools, hospitals, and offices. In addition, they conducted personal interviews to garner specific information from those who suffer from the condition. What they found contradicts the common explanation for workplace depression, which is that it is caused by a burdensome workload and the resulting anxiety and stress. According to an article in Science Nordic, the study showed no correlation between an excessive workload and high levels of stress and anxiety.

Researchers do understand why many tend to blame workplace depression on the amount of work they have, however. "When high levels of work pressure and depression appear to be linked in people's consciousness, it is not because a heavy workload increases the risk of depression. Or that's not what we found in our study," says psychologist Matias Brødsgaard Grynderup, PhD, of the Department of Clinical Medicine at Aarhus University. "Instead, depression can make work assignments appear insurmountable, even though the depression was not caused by the workload."

So, if a heavy workload isn't the cause of depression, what is? The study's findings show that workplace depression is linked to low levels of institutional justice. Simply put, employees may suffer health consequences if they feel that they, and others they work with, aren't being treated fairly. Other factors include whether an employee feels like they're listened to, blatant favoritism, and the overall demeanor of those in management.

According to Meryl da Costa of the South African Depression and Anxiety Group, employers who knowingly or unknowingly promote a negatively-charged workplace may suffer inadvertently. After all, a growing body of research indicates that employers lose as many as 16 days per employee to health issues such as stress, anxiety, and depression. Employee depression can reportedly manifest itself in a variety of ways, causing concentration and memory loss, indecisiveness, confusion, and a lack of humor about everyday situations. And as an article in Destiny Connect noted, employees experiencing these symptoms may act out by missing work, being irritable or impatient, crying, or blaming others.

Grynderup suggests that employers get into the habit of preventing workplace depression before it takes hold. "When the employees' sense of justice plays such a central role in minimizing the risk of depression, this is probably the area that the preventive work should focus on," Grynderup told ScienceNordic. "I recommend a management style in which there is a clearly expressed wish to treat employees properly - combined with a transparent organizational structure."

Another expert, Psychologist David Rosenstein, suggests the same, adding that employers who offer additional mental health resources may benefit. "Companies can help by encouraging employees to go for early screening for depression; providing education within the workplace about depression and other mental illness such as stress, anxiety and PTSD; and implementing employee assistance programmes," Rosenstein told the Huffington Post.