New Study Finds That College Students Are Not Learning 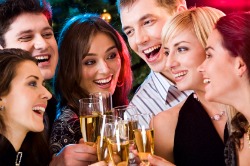 In recent years, researchers have witnessed rising wages for college educated workers and a growing demand for a highly skilled work force, The Economist noted. A new study, however, has revealed that these trends may not be related to higher educational quality. In fact, results have shown that college students are not learning as much as they should and are making marginal improvements on aptitude tests measuring critical thinking skills.

The new book, Academically Adrift: Limited Learning on College Campuses, cites data from student surveys and transcript analysis, concluding that many students have shown minimal academic gains during their tenure at colleges and university campuses, Inside Higher Ed reported. Researchers analyzed the results of more than 2,300 students, who took the Collegiate Learning Assessment, a test designed to measure gains in critical thinking, analytic reasoning and other high level skills taught at college.

"How much are students actually learning in contemporary higher education?" Richard Arum, professor of sociology and education at New York University and Josipa Roska, assistant professor of sociology at the University of Virginia, asked in their study. "The answer for many undergraduates, we have concluded, is not much." For many undergraduate students, they write, "drifting through college without a clear sense of purpose is readily apparent."

Debra Humphreys, vice president for communications and public affairs of the Association of American Colleges and Universities, said she viewed the book as "devastating" in its critique of higher education. College officials, students and parents should be galvanized by the book's findings to pay greater attention to student learning and encourage better educational practices, she said.

According to The Chronicle of Higher Education, students understand their college experiences as being focused more on social than on academic development. The researchers discovered that students are spending a large amount of time on nonacademic activities, including working and participating in fraternities and sororities, instead of studying. In addition, students are enrolling in courses that do not require substantial reading or writing assignments and rarely interact with their professors outside of the classroom.