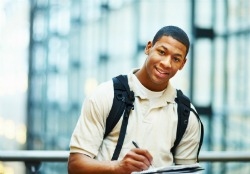 When media outlets and academic studies publish statistics regarding young black men and college, the news is rarely positive. According to Inside Higher Ed, black men represent just 4 percent of all undergraduate students, and their completion rates are the lowest of all major racial groups in the country. Professor Shaun Harper set out to find out why in his study, "Black Male Student Success in Higher Education."

Harper is the director of the University of Pennsylvania's Center for the Study of Race and Equality of Education. His report, published Monday, explores what characteristics and conditions nurture success among black male college students. However, what separates Harper's report from many others of its kind is its positivity: rather than identifying problems that limit black men's potential, which Harper coins a "deficit model," he aimed to identify positive influences using an "anti-deficient achievement framework."

"If all you read about [black men] is bad news, it's really hard to craft high expectations for them," said Harper to Inside Higher Ed.

According to a University of Pennsylvania press release, Harper interviewed 219 black male achievers from a wide breadth of instructions, from public universities to elite private colleges. The study examined topics such as selecting a college, paying for school, college engagement and responses to racism.

The report found that for most participants, success began at home: the overwhelming majority of interviewees always knew they would attend college simply because their parents expected them to. Their families also sought out resources that might help their sons succeed academically such as tutoring and college prep initiatives. Other strong motivators included encouraging teachers and groups like the YMCA or the Boys and Girls Clubs of America.

But perhaps the strongest driver for success among young black students was finding support from like-minded others. According to the report, many respondents found support in "same-race peers," mostly older students attending the same college or university. Harper quoted one anonymous student who believes a "macho mentality" had prevented him from asking for help, until he joined a discussion group founded by other black students.

"They told me I would really look weak if I quit college because I was too proud to ask for help," quoted the report. "They also made sure I knew exactly where to go to get exactly what I needed to be successful."

All in all, Harper noted that his most surprising finding was also his most disappointing one.

"Nearly every student we interviewed said it was the first time that someone had sat him down and asked how he had successfully navigated to and through higher education, what compelled him to be engaged and what he learned that could help improve achievement and engagement among black male collegians," wrote Harper. "Despite all that is stacked against them -- low teacher expectations, insufficient academic preparation for college-level work, racist and culturally unresponsive campus environments -- black males still find ways to succeed."