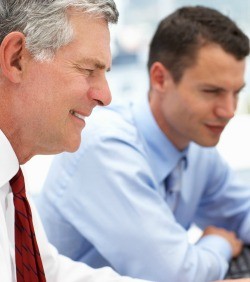 American Express collaborated with Millennial Branding, a Generation Y research and consulting firm, on a recent study examining millennial workers and their managers. The study, titled "Gen Y Workplace Expectations," found that managers have a generally negative perception of their Gen Y employees.

Researchers surveyed 1,000 Gen Y employees, aged 22 to 29, and 1,000 managers in American businesses across industries and of varying sizes. Survey results found that managers believe that millennials have a poor work ethic (47 percent), unrealistic compensation expectations (51 percent), and are easily distracted (46 percent). Millennials, on the other hand, have an overall positive view of their managers and think that managers can offer wisdom (41 percent), experience (59 percent), and a willingness to mentor (33 percent).

What's the cause of this perception gap? Researchers discovered the main disconnect when examining both parties' views on career advancement.

Millennials and managers generally agree on the qualifications for a promotion. Both parties believe that soft skills are most important, with prioritization, teamwork, and a positive attitude being the three most important skills for managers. Both parties also agree that being a subject matter expert is essential to getting promoted. Despite this agreement, managers do not think that millennials actually meet these requirements.

As stated in Business Insider, the two skill sets that managers think millennials must work on the most are interpersonal and soft skills. However, Dan Schawbel, founder of Millennial Branding, mentioned that it can be difficult for millennials to refine the soft skills that managers look for because of their dependence on and continuous interaction with technology. "It's hard to build soft skills and real relationships through technology," he stated. Schawbel went on to speak about the importance of soft skills, explaining that while hard skills do assure that employees will get the job done, they do not guarantee that workers will be able to exceed the minimum expectations.

Who's to blame for the gap in managers' expectations and reality? According to Schawbel, both generations are at fault. Managers right now do not know how to effectively manage millennial workers. They typically turn to either the hands-off or micromanaging approach, neither of which work. In order to reduce the gap, Schawbel mentioned in his statement to The Daily Beast, there needs to be greater communication between managers and employees. Schawbel explained that millennials are often unclear about their employers' expectations. Surveyed millennials mentioned that they were not getting enough feedback from their managers, and 53 percent stated that a mentor would help them become better and more productive workers.

The study also revealed a difference in expectations regarding how long it should take to earn a promotion. Millennial Branding noted that 75 percent of managers affirmed a timeline of at least four years, and 32 percent stated that it takes at least eight years. However, only 66 percent and 27 percent of millennials agreed with those respective timelines. Schawbel asserted in The Daily Beast that communication issues are also at the heart of this disagreement. "The No. 1 thing that managers need to do is set expectations. As millennials don't see a path up or a certain way to progress up their companies, they leave, they look elsewhere. If managers say, 'Talk to these people and if you do A, B, and C, you will end up in my position in so many years.' That's key. Those expectations are so important, and nobody is setting them, which is why turnover is so high."

Schawbel offered advice to both generations on how to approach the manager-employee relationship. Managers need to explicitly tell workers what their expectations are, when the employee can expect a promotion, and what the employee's compensation will be once he or she fulfills certain goals. After providing this information, managers should allow employees to work with freedom and ownership. Millennial workers, on the other hand, must understand that they are expected to achieve above and beyond what they were hired to do. Schawbel also mentioned that a large portion of millennials' career success depends on their boss's success, so if they make their boss look good, they can in turn benefit when their manager advances in the organization.

"Why Gen Y Workers Have No Idea What Their Managers Expect From Them," businessinsider.com, September 3, 2013, Vivian Giang