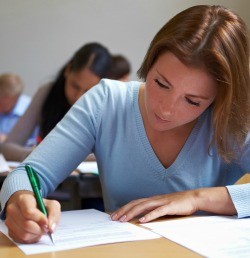 Starting next year, seniors at about 200 U.S. colleges and universities will take a new test that could enhance their chances of landing a job after graduating.

The test is being introduced at a time when many question the value of a college degree. As Judah Bellin, assistant editor at the Manhattan Institute, noted in FOXBusiness, it has become increasingly difficult to assess the value of a college education. With the rising cost of college, students wonder if the price tag is truly worth it, and as Reuters reported, grade inflation has been a growing problem as institutions fight to attract and hold on to high-quality students. According to The Wall Street Journal, recent studies have shown that grade point averages have been on the rise for decades; however, employers feel that many new grads are not adequately prepared for the workplace. A 2010 survey showed that just a quarter of employers think colleges and universities are doing a good job preparing students for the global economy. Even many new grads feel unprepared for the work world.

"We used to assume that if you got a bachelor's degree, you were ready for work and citizenship, but that is not the case anymore," said Roger Benjamin, president of the Council for Aid to Education (CAE), the nonprofit that developed the new test, in FOXBusiness.

According to The Wall Street Journal, the voluntary 90-minute standardized test -- called the Collegiate Learning Assessment Plus (CLA+) -- is an SAT-like exam, designed to asses students' abilities in critical thinking, document literacy, analytical reasoning, writing and communication -- skills that many employers look for in prospective new hires. The CLA+ was based on a previous exam used by universities to grade themselves on how well their students were learning. It will cost students $35 to take the exam, though many schools are expected to cover the fee. FOXBusiness noted that the exam has been beta-tested with 20 schools this past spring.

Reuters reported that students will be able to post their CLA+ results on their resumes and can send official copies of the reports to potential employers.

"It's another set of information that employers can use to review the applicant," explained Robert Keeley, director of assessment services at the CAE, in Reuters. "We're looking to equip students to share their scores more readily than they have in the past."

The new test is said to be an important tool for companies. The Wall Street Journal reported that various employers, such as General Mills Inc., Procter & Gamble and Teach for America, have long used their own assessment tests to evaluate job applicants beyond grade point averages. Recently, Google announced it would change its hiring process to put less emphasis on GPA after detailed analysis showed that the numbers did not predict anything. Some companies even use the GRE to evaluate applicants.

While employers may be happy to have a better assessment of new grads' skills, one student reported having mixed feelings about the new test. Cory LaDuke, a senior at St. John Fisher, told The Wall Street Journal that he was hesitant about taking another test but also acknowledged that it made sense, as some people "fake their way" through college.

"It kind of sucks that an employer can't trust your GPA, but that's the way it is right now, so this also an opportunity [sic]. It's another way to prove yourself," said LaDuke in The Wall Street Journal.