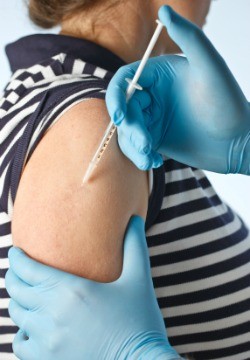 College students in Texas will soon have to add something new to their list of things to do before classes start.

A new bill signed into law by Governor Rick Perry will make the state the first in the country to require all first-time and transfer college students under 30 to be vaccinated against meningococcal meningitis, reported The Texas Tribune. The new law is an extension of the Jamie Schanbaum Act of 2009, which was named after the now 22-year-old University of Texas at Austin student who contracted meningitis in 2008.

"I was admitted to the hospital and I didn't leave for seven months," Schanbaum recounted to The 33 News.

Meningitis is a rare but deadly disease in which the membranes protecting the brain and spinal cord become inflamed. It can be caused by a viral or bacterial infection, the latter of which can be much more devastating, causing blindness, deafness, brain damage, the loss of limbs or death. As USA Today reported bacterial meningitis can easily spread in close quarters such as college dorms and Army barracks. According to the Centers for Disease Control and Prevention, adolescents are at a higher risk than other age groups. The San Antonio Express-News reported that approximately 1,500 cases are diagnosed annually nationwide, with some 10 percent of sufferers dying. As many as 15 college students per year die from the bacterial infection.

After spending months in the hospital, Schanbaum lost her legs and most of her fingers.

"My hands were wrapped for seven months," she said. "I couldn't do much. To give hugs was a big deal."

In 2009, Schanbaum, along with her mother Patsy, fought for the passage of a law to require first-time college students living in dorms to be vaccinated. But, as The 33 News pointed out, the disease can still be passed on to students who do not live on campus--in February, Nicolis Williams, a Texas A&M University freshman who lived off campus, contracted meningitis and died.

According to The Texas Tribune, the new law was named for Williams and will mandate that all new students, living on and off campus, get vaccinated. It will take effect January 2012.

Some are uneasy about the new law. State Rep. David Simpson (R-Longview) opposed the measure saying, "I'm for freedom. I'm not for the government dictating to us what we must do with our bodies."

Some parents are also concerned about the potential side effects of the vaccination, arguing that the vaccine offers a "false sense of security". Administrators say that record-keeping and follow-up for students who do not comply will be difficult and costly.

But for many, the new law is a victory.

"From this day forward, we'll never know, of course, whose life was saved as a consequence, but no doubt there will be people whose lives are saved," said state Sen. Wendy Davis (D-Fort Worth).