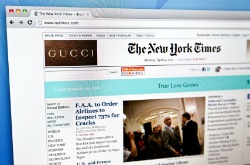 The New York Times Company and the University of Southern California have teamed up to offer a new online continuing education program.

According to USC News, The New York Times Knowledge Network and USC will offer more than 40 online courses in seven areas of study--architecture, arts management, business, cinematic arts, communications, medicine and politics. The programs will be tailored for working as well as non-working adults who want to learn new skills. Courses will be taught by USC faculty with participation by The New York Times journalists.

As Inside Higher Ed reported, the courses will not count towards a degree; however, this is the first time that the Times Company will offer a series of coherent coursework, which suggests that it will eventually offer full-fledged degree programs. Felice Nudelman, executive director of education at the Times Company, confirmed that that is indeed the plan.

"We intend to grow in that market," said Nudelman. "With USC, we are excited with this first step because we are excited about the potential for further depth and collaboration."

While the partnership will help the media company move more into the realm of higher education, it also helps USC expand its global offerings.

"This is a truly innovative way to offer a comprehensive continuing education program that will feature a broad course and exceptional faculty," said Nudelman to USC News. "Together we will establish a global online resource for students who are interested in maximizing their education regardless of geographic location."

Though the programs will be primarily for the growing market of adult learners, a series of six journalism courses will be offered in the fall specifically for high school students. They will be able to enroll in one of the two-week courses or can complete all six courses to earn a certificate.

Inside Higher Ed noted that the Times Company's partnership with USC is somewhat of a step back from the other certificate programs it offers with Fairleigh Dickinson University and Ball State University. Nudelman, however, argued that there are plenty of lifelong learners who will pay to learn simply for the sake of learning.

According to USC News, domestic courses will begin October 10. The Los Angeles Daily News reported that the NYT/USC venture will launch internationally on October 13 at the USCGlobal Conference in Hong Kong. Full details are available on the program's website, but Inside Higher Ed noted that most courses last about four weeks and cost between $195 and $275.