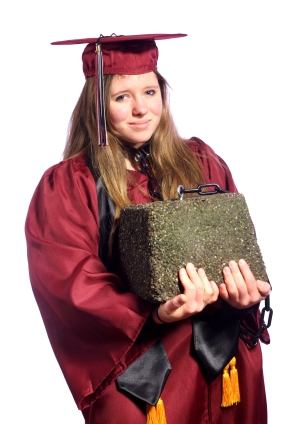 New York University has decided to halt a one-year experiment in which it contacted accepted students and their parents to discuss the high cost of tuition and the ramifications of incurring student debt.

The Chronicle of Higher Education reports that the university made 1,800 calls to about 25 percent of accepted students who qualified for financial aid, yet doing so had no effect on the number of accepted students who enrolled. NYU's tuition, board and fees are among the nation's highest at more than $50,000 per year, and the school is considering how best to convey the message that enrolling may not be the best financial choice for everyone.

"From a financial literacy standpoint regarding financial aid, there's more we can do and more we're going to do," Randall C. Deike, the university's vice president for enrollment management, told the Chronicle.

The announcement comes soon after an article was published in The New York Times about Cortney Munna, who accrued nearly $100,000 in student loan debt from her four years at NYU. The article compared her situation to subprime borrowers who assumed that the value of their homes would always increase, and compared the student lenders to mortgage lenders who did not verify borrowers' incomes.

"All I could see was college, and a good college and how proud I was of her," said Munna's mother Cathryn, who was quoted in the Times. "All we needed to do was get this education and get the good job. This is the thing that eats away at me, the naivete on my part."

Unfortunately, Munna is far from the only one in this situation. In an article published by CNN.com, Ryan Durosky, 26, describes how he racked up nearly $300,000 in debt financing his education at NYU.

"I realized that good schools were meant for the 'rich' kids from upscale suburbs whose parents could afford to pay for it outright," he writes. "I had no business attempting to get a good education on my own. . . . My college choice is a mistake that will haunt me for a long time. I'll never know if NYU had an impact on my future opportunities."

According to the Chronicle, Deike is in favor of explaining the financial ramifications of student debt to all applicants, and to start earlier than when students receive acceptance letter and offers for financial aid.