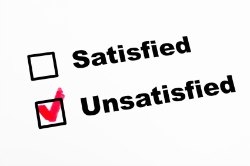 Many U.S. workers at some point in their careers feel they work for difficult, if not downright awful employers. Workplace satisfaction is mostly subjective, however, so who is to say which companies really rank among the worst? One firm has given it a go.

A new analysis entitled "America's Worst Companies to Work For," published by 24/7 Wall St., ranks 11 public companies it says are among the worst employers in the nation. The firm used online employee reviews gathered by Glassdoor.com to create its list. Only companies that had a minimum of 300 reviews could be considered, giving a total pool of 202 companies. 24/7 Wall St. then identified the bottom 10 percent of employers that comprised its list.

Topping the list: satellite television provider Dish Network. According to Bloomberg Businessweek, Dish workers' chief complaints include low pay, mandatory overtime and bad management. One employee noted that he or she felt "extremely micromanaged"; another former employee added: "Lunch has to be taken between 11:30 and 2:00 p.m. no matter what"; another comment was that "employees are encouraged to eat lunch at their desk in order to 'work through it.'"

"To say this is the worst place to work in America -- I've worked in a lot worse places. This isn't one of them," said Clayton.

Despite Clayton's sentiment, however, Bloomberg Businessweek notes that the list may have prompted Dish to re-evaluate its relationship with its employees: The company says it is surveying its 30,000 employees regarding workplace satisfaction.

"We are changing the ways we are doing business in an effort to win not only with customers, but also with all of our stakeholders -- employees, business partners, shareholders, and the communities in which we reside," said spokesman Robert Toevs in an email quoted by Bloomberg Businessweek.

But while Dish Network is taking heat for its position on the list, it was not the only company examined in the report: Rounding out the top five: Dillard's, RadioShack, Hertz and OfficeMax. Other well-known companies listed include Sears, Hewlett-Packard and GameStop.

According to 24/7 Wall St., nearly all of the companies included were either in retail or industries that deal heavily in customer service, like satellite TV or banking. In fact, a reputation for lackluster customer service and low employee satisfaction seems to go hand in hand as companies like Dish Network, Sears and RadioShack often receive low marks on the American Customer Satisfaction Index.

24/7 Wall St. notes that common themes among companies that made the list include poor earnings, limited advancement potential and long hours. Some employees -- especially those working for OfficeMax, Dish and RadioShack -- say they feel like their employers have been bulldozed into the ground by competitors and are in serious trouble. That stress, it seems, trickles down.