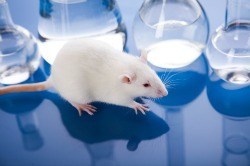 You have likely heard a great deal about gender gaps in the workplace, in the classroom and even on the playground, but did you know gender biases extend to the lab rats, too? And not the human kind. This week, the National Institutes of Health announced in the scientific journal Nature that it will work to curb science's favoritism for male test animals by limiting funding to research with a clear testing sex gap -- a move some experts say could have a widespread, positive impact on human health.

The NIH, the world's largest source of medical-research funding, hopes limiting grants for projects with a notable sex-gap in laboratory animals will improve health outcomes among (human) women, reported The Verge. Jill Clayton, associate director for NIH research on women's health and co-author of the Nature article, told the publication that "using male animals and cells is by and large the status quo right now," despite the fact that many studies have shown women may respond differently than men to certain drugs and therapies. The fact that the majority of preclinical pharmaceutical trials use few, if any, female subjects might explain why women experience a higher rate of adverse drug reactions.

Why do scientists have such a strong preference for male test animals? Jeffrey Mogil, a pain researcher who regularly works with animal subjects at Montreal's McGill University, told The Verge that many researchers believe female animals introduce more variability into test data, a belief many studies have disproved, including one published by Mogil's own team in 2005. "I guess if you go back far enough it was sexism," he said, adding that scientists mostly just "do experiments the way they were taught to do experiments," even though the practice is "probably unethical."

The report drew the praise of at least one researcher, University of California, Berkeley's Irving Zucker, a psychology professor who authored multiple studies touching on scientists' preference for male animals and the research problems that may follow. He told The Chronicle of Higher Education that the NIH policy shift is "a dream come true" and that his only question is what took so long.

Clayton told The Chronicle that the NIH will begin adopting the new policy in October by training staff and other grant-review panel participants to apply the new requirements. Full enforcement will follow soon after.

"It will be implemented very quickly, just in a rolled-out fashion so that it makes sense," said Clayton. She said she hopes the approach will ensure gender balance becomes a standard laboratory testing, not "an add-on" with only a few female specimens making the final research cut.