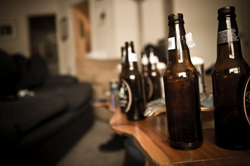 Despite recent headlines of Four Loko craze on college campuses, binge drinking among students has declined in the last few years. According to surveys conducted at Purdue University, binge drinking has dropped from 48 percent in 2006 to 37.3 percent in 2009, reported The Wall Street Journal. Similar downward trends have been seen at other college campuses and health advocates attribute the decline to an increase in alcohol-free college events.

"The message we hoped to spread was to be safe and that you do not need to be intoxicated to have a good time," said Myles Gamboa to The Brown and White, Lehigh University's student-run newspaper. Gamboa is a student at Lehigh University who organized Mix It Up!, a "mocktail" event on campus. "The non-alcoholic beverages were a way to meet new people and to learn about alcohol awareness," he added. Mix It Up! let students concoct their own non-alcoholic beverages that were later judged for prizes.

Busteed said the key to a successful alcohol-free event is to have entertaining activities during late-night hours, when students typically go out to drink. Popular activities include movie nights, live music or offering free food or prizes throughout the night. Brown University holds an alcohol-free "foam party" during Spring Weekend and North Dakota State University hosts "Club NDSU", where students can take advantage of simulated sumo wrestling, gladiator games and casino nights. Lehigh University's Mix It Up! event featured Alcohol Jeopardy, a water pong competition and a drunken simulation goggle race, noted The Brown and White.

"Once you pull students in, they find out they can have a good time without alcohol," said Greg Brightbill, a senior who is part of a student group that organizes no-drinking events at Frostburg State University, to The Wall Street Journal.

The reasons behind alcohol-free college activities are obvious--according to a 2009 study at the University of Michigan, roughly 37 percent of college students binge drink. In addition to being linked to risky sexual behavior, lower grades and violence, binge drinking is also high in calories and disrupts normal sleep stages, pointed out Fox Business. However, noted The Wall Street Journal, these alcohol-free activities can be extremely beneficial for light or non-drinkers as well.

"...It's important to support those students who are non-drinkers, because if there's nothing for them to do they will probably become drinkers," said Laura Oster-Aaland, director of orientation and student success at North Dakota State University.