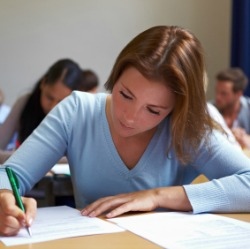 Studies have shown high-achieving, low-income students rarely apply to elite colleges they could get into, a trend referred to as undermatching, The Chronicle of Higher Education reported. So two researchers recently aimed to determine if these students would select different colleges if they became better informed about their options. The answer they found strongly supports publicizing higher education and its benefits to lower-income students.

"To not make decisions well simply because you don't know what's out there, that's sad," said Caroline M. Hoxby of Stanford University, who conducted the research along with Sarah E. Turner of the University of Virginia, according to The Chronicle of Higher Education.

In their paper, "Expanding College Opportunities for High-Achieving, Low-Income Students," Hoxby and Turner studied the differences between individuals who received a packet containing admissions standards, graduation rates and financial aid policies by mail and those who didn't, according to the Stanford News. Nearly 40,000 high-achieving, low-income college students participated in the randomized, controlled trial.

The information was customized to inform students about their local options and did not promote any specific schools. Students were provided with each school's tuition cost along with an estimate of what they'd be expected to pay. The packets also varied: while some focused on general information, others more specifically referenced net costs or admission-fee waivers. In all, the researchers estimated that the recruitment tools sent to some students cost about $6 apiece, an "inexpensive" way to ensure students were being informed, according to Hoxby.

"We tried to give them a wakeup call: 'Hey! As sticker prices go up, net costs go down for low-income, high-achieving students. If you want to go to a college, apply. Don't rule yourself out,'" Hoxby said in the Stanford News.

Results showed that 30 percent of the control group, which didn't receive the interventions, were admitted to a college that matched their academic qualifications, wrote The New York Times. In contrast, 54 percent of students who did receive the intervention packets gained admission to such selective colleges. The data suggest that well-qualified, low-income teenagers who want to attend top schools might apply if they had a better understanding of their options, wrote Hoxby and Turner.

The researchers also said the program could pay off financially for these types of students and the colleges they attend. They estimated that interventions could result in an extra $222,990 to $567,821 in greater lifetime earnings for these students and that the effects of the program, for every $10 spent, were at least 275 times greater than face-to-face counseling sessions for this demographic. Schools could also benefit by having a student body that is more socioeconomically diverse.

David Coleman, president of the College Board, which administers the SAT, told The New York Times that the study's results were significant enough to inspire change at his organization, which might start to send students information in a similar way. Coleman previously told The New York Times that increasing opportunities for students was a top goal of his when he came on board with the College Board last fall.

"We can't stand by as students, particularly low-income students, go off track and don't pursue the opportunities they have earned," Coleman said.