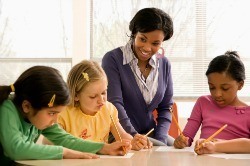 After years of uncertainty and strife, New York City's public school teachers finally reached a labor agreement with the state of New York, the New York Post reported. The new nine-year labor contract, which was voted in by 77 percent of the 90,000 or so members of the United Federation of Teachers, offers good news and some bad news for teachers. According to The New York Times, the deal raises educator's wages by an average of 18 percent while also including a provision for billions of dollars in back pay. However, teachers in the union were asked to compromise when it came to their health care benefits. In fact, many were upset about a provision in the contract that might force them to contribute to their health insurance premiums for the first time.

That aside, the contract appears to have offered teachers more good than bad. Part of the new agreement, for example, includes a provision that allows schools to adopt flexible work rules closer to those of charter schools. The new labor contract also allocates time previously intended for student tutoring sessions towards teacher training and communication with parents -- a move many in the UFT believe will improve the performance of students and teachers alike.

"The new agreement gives teachers and parents a larger voice in how their schools are run, and how they can better serve their students," Michael F. Mulgrew, president of the United Federation of Teachers, told The New York Times. "We now have to work together -- teachers, parents and the D.O.E. -- to make these innovations successful."

While imperfect, many New York City teachers believe that this is not only the best agreement they could hope for but also a huge improvement over conditions they faced during the former mayor's time in office.

"The last mayor was not very pro-teacher and wasn't interested in our well being," Suzette Freedman, a third-grade teacher at Public School 75, told The New York Times. "There's not really another option."

Now that it's over, teachers and other union members are able to breathe a sigh of relief. Enthusiasm for the deal, in addition to overall fatigue ongoing negotiations, brought out voters in droves. According to Chalkbeat, turnout hit an all-time high for the UFT, with 90,731 total ballots cast and counted.

But despite the fanfare, some outsiders are worried about the unintended consequences of the deal. For example, critics have expressed concern over whether the loss of tutoring time could negatively impact students who need the most help. Others worry that certain provisions of the agreement will stifle school's ability to try new things and experiment.

Only time will tell whether the teachers' new contract improves the learning outcome of students. However, after working without a contract for many years, most UFT educators are just happy to put it behind them.

"Something is better than nothing," Maritza Narvaez, a pre-kindergarten teacher at P.S. 239 in Queens, told Chalkbeat. "We're being recognized for our hard work."