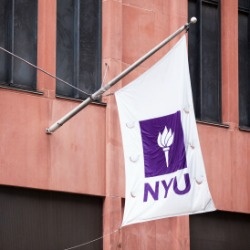 New York University has announced plans to add 6 million square feet of new space to its campus over the next two decades, reports The Huffington Post. School officials have remained mum on the project's costs, but some estimates put it in the billions. A vocal group of professors are speaking out against the plan, suggesting that the expansion could make education even more expensive for students at a time when student loan debt is soaring.

"The situation is so toxic right now," Adam Becker, NYU associate professor of religious studies and expansion critic, told The Huffington Post. "People are angry at the place." While NYU maintains that the expansion is necessary to compete with other universities that can offer students and faculty more space, some critics, like Becker, worry that the cost could be passed on to students. NYU is the largest private university in the nation: its 2010 graduating class departed campus owing an estimated $659 million, which is the highest for any class in the country save for certain for-profit institutions.

The student debt issue is not unique to NYU. According to The Huffington Post, The College Board estimates that U.S. college costs have grown 24 percent in the last five years, while family incomes have declined. As a result, more students are borrowing increasing amounts of money to attend school. Things may get worse before they get better: The Washington Post reports that unless lawmakers strike a deal, interest rates on subsidized Stafford student loans -- which account for about a quarter of all federal student loans -- will double July 1.

NYU's intended expansion is not the only investment bringing the institution scrutiny: a recent article in The New York Times reports the school is also taking heat for offering executives and star faculty loans for lavish vacation homes. Even former George Washington University president Joel Trachtenberg, who has publically defended high administrative salaries, described the practice as too "sexy" for him. "I don't mind paying someone a robust salary, but I think you have to be able to pass a red-face test," he said.

Sen. Charles E. Grassley (R-Iowa) questioned the prudence of NYU's generous perks earlier this year during a confirmation hearing for treasure secretary appointee and former NYU executive vice president Jacob Lew, who had received such a loan. "Universities are tax-exempt to educate students, not help their executives purchase vacation homes," Grassley said in a written statement, as reported by The New York Times. "It's hard to see how the student with a lifetime of debt benefits from his university leaders' weekend homes in the Hamptons."

"Everything you need to know about the student loan rate hike," washingtonpost.com, June 13, 2013, Dylan Matthews