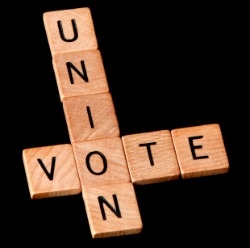 The topic of unions is often deeply politicized in the United States, though many people likely agree that their purpose is to advocate for workers in employer negotiations. A newly minted union agreement between a college and its graduate students -- not paid employees -- might force us to reconsider that definition.

New York University graduate assistants voted overwhelmingly to join the United Automobile Workers last week, reports The New York Times, making it the only graduate assistants' union in the country to be recognized by a private university. Contract negotiations for the new U.A.W. affiliate -- which will include about 1,247 graduate students from NYU and its Polytechnic Institute in Brooklyn -- are expected to begin within the next few weeks. Matt Canfield, a fifth-year anthropology doctoral student, told The New York Times that he believes the move could press the school to improve health coverage for students, who saw a large jump in premiums last year.

"This is something we've been working for for eight years," said Canfield.

The bulk of the institution's graduate assistants voted to join the U.A.W. in 2000 following a favorable decision by the National Labor Relations Board, and became the first group to negotiate a contract with a private institution two years later. Then, in 2005, the labor board reversed that decision, and NYU stopped recognizing its graduate union once its contract expired.

The New York Times reports that following years of protests, NYU and the UAW announced that the school would recognize and bargain with the union if a majority of graduate students voted in favor of forming it. Last week's 620 to 10 vote effectively sealed the deal. UAW regional director Julie Krusher told The New York Times that she believed the vote was so one-sided because the university did not campaign against unionization like most employers tend to do.

"This election stands out as one of the most positive, democratic processes I've ever experienced," Krusher said in a separate statement acquired by The Village Voice. "NYU's genuine commitment to neutrality fostered a remarkably respectful environment in which graduate employees were free to choose representation without threats or intimidation."

Those following the story might wonder if the move to unionize is a suggestion that graduate students are effectively employees, since labor unions traditionally represent workers in employer negotiations. According to Slate Magazine, a 2004 NLRB ruling suggests the answer is no -- graduate students are not considered employees. Nonetheless, they do tend to teach many of the introductory-level courses at private research universities (like NYU), and do what Slate calls "a massive amount of lab and research grunt work," not to mention virtually "every last red mark of the grading." Labor activist and Duquense University adjunct Robin J. Sowards told Slate that students are told they are "apprentices," as if "feudalism hasn't been dead for centuries."

NYU sociology professor and union advocate Andrew Ross suggested in an email to Slate that this "apprenticeship" way of thinking means graduate students must "work for next to nothing" in an effort to "(learn) their craft." He said that given structural changes in higher education and a job scarcity, an NYU graduate's term as student instructor is quite feasibly their first and last opportunity to teach.

"Recognizing a union, in this case, is a matter of respecting the dignity of those with whom you share the workplace," said Ross.

Fifth-year NYU film studies graduate student and organizer Hadi Gharabaghi told The Village Voice that the group's move to unionize could establish a precedent that other institutions might follow.

"We would be more than happy and proud to set an example for that," said Gharabaghi.