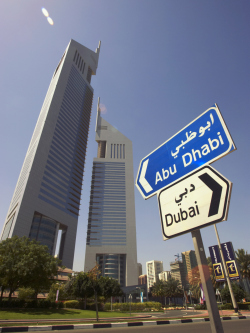 NYU Abu Dhabi is a project spearheaded by NYU's president John Sexton. Rather than creating another branch campus with international programs where students spend a semester abroad, Sexton plans to open NYU Abu Dhabi as a full-fledged four-year liberal arts university that will initially offer 18 majors. Once the university moves to its permanent campus in 2014, the institution will house about 2,000 undergraduates. NYU Abu Dhabi will be a sister school of NYU and will issue its own diplomas to students, says the New York Times.

According to Inside Higher Ed, NYU Abu Dhabi has already dubbed itself the "World's Honors College." The freshman class is comprised of 150 students from 39 countries with a median SAT score of 1470; a score that is acceptable at Princeton, Stanford or Columbia. Of the 9,048 students who applied, only 189 were accepted. More than a third of the incoming students are from the U.S. The next biggest sources are the host country, the United Arab Emirates, and China. With an acceptance rate of just 2.1%, NYU Abu Dhabi is already among the most selective undergraduate institutions in the world.

With the help of the Abu Dhabi government, NYUAD and the Institute of International Education combed the planet for the best and brightest students. According to the New York Times, the Institute of International Education helped identify 900 of the world's top high schools for NYU Abu Dhabi to recruit from. NYU administrators, guidance counselors and principals held events in more than a dozen international locations to pitch the global university. The final step involved flying out groups of applicants to Abu Dhabi for long weekends where professors gave sample classes and provided feedback to the admissions team on how students performed during group discussions. "The weekends were profoundly moving, and for the students, I think, formative experiences," said Alfred H. Bloom, vice chancellor of NYU Abu Dhabi and former president of Swarthmore College.

The Wall Street Journal estimates that the cost of attending NYUAD is $62,454 but Abu Dhabi will pay the difference between the cost and the amount a student can pay. Inside Higher Ed adds that NYU Abu Dhabi offered generous financial aid packages that were loan-free. Linda G. Mills, the associate vice chancellor for admissions and financial support at NYUAD says the school made a commitment that their financial aid packages would not cause debt for their students. "We also knew that to attract the caliber of students that we were looking for, we had to compete with the generous financial aid packages offered by top universities in the U.S., and also had to factor in that outside of the U.S., many top schools charge little to no tuition," said Mills.

Most undergrads do not envision spending their college years in a place like Abu Dhabi. However, many were persuaded after their first visit. Laith Aqel, co-valedictorian of his high school, told the New York Times that he thought he would end up at a classic New England campus until his visit to Abu Dhabi. "I've never seen professors so excited to teach their students as well as learn from them. The greatest appeal is the student body itself."