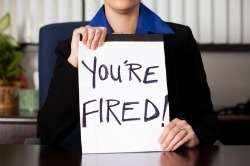 A former New York University professor is claiming that actor James Franco is responsible for him being fired from his job.

Jose Angel Santana, who formerly worked for NYU as a visiting assistant arts professor claimed racial discrimination and harassment in a lawsuit filed last week in New York city's Supreme Court, according to The Chronicle of Higher Education. He alleges that, being a man of both African and Cuban descent, he received different treatment, including lower pay, than did his white colleagues, The Chronicle reported. He also claimed that he was demoted without reason from his head position of the school's acting program as well as being forced to share office space with a lower-ranked instructor.

So how does this all tie back to Franco? The actor took a class called "Directing the Actor II" from Santana, The Chronicle reported, and apparently received a D in the class in part because he only attended two of the 14 classes. Santana, who had been with the school since 2008, said his contract was not renewed in August 2011 after he brought up questions about the school's favorable treatment of Franco as well as potential conflicts of interest involving faculty.

According to USA Today, NYU's chairman of the graduate film department had a cameo appearance in a film that was financed by Franco and another of his professors was reportedly hired by Franco to write and direct a 2010 film originally called "William Vincent," but later changed to "Shadow & Lies." Franco played a key character in that film.

"The school has bent over backwards to create a Franco-friendly environment, that's for sure," Santana was quoted in The Guardian as saying. "The university has done everything in its power to curry favour with James Franco."

Santana also said that other colleagues gave Franco good grades despite the actor having high levels of absences in their classes as well.

"In my opinion, they've turned the NYU film degree into swag for James Franco's purposes, a possession, something you can buy," Santana told The Chronicle.

"We have not seen the lawsuit yet, but the claims we are seeing in the media are ridiculous," Beckman is reported as saying in The Chronicle. "Beyond that, it is regrettable and disappointing to see a faculty member--former or otherwise--discuss any student's grade for the purpose of personal publicity."

Franco is well-known for his pursuit of higher education. He has been a Ph.D. candidate in English at Yale University and is planning on entering a doctoral program in creative writing and literature at the University of Houston in the Fall 2012, according to The Chronicle.

"Professor Says He Was Dismissed for Speaking the Truth to James Franco," chronicle.com, December 19, 2011, Dan Berrett