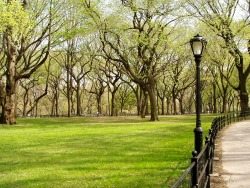 Earlier this month, a New York judge handed opponents of New York University's controversial Greenwich Village expansion a victory when she declared three of the institution's four planned towers could not move forward -- at least where slated. NYU intends to appeal; expansion opponents, preservationists and even a famous actor urge the school to return to the drawing board. According to The New York Times, the only thing certain about the saga is that it will not end anytime soon.

Community leaders -- including the likes of actor John Leguizamo -- gathered at the Greenwich Village Society for Historic Preservation on Friday to strategize in the wake of a court decision mostly blocking NYU's expansion onto land currently (but unofficially) used as parkland, reports The Huffington Post. Their goal: Preventing a NYU appeal. Jim Walden of Gibson, Dunn & Crutcher, the pro bono attorney representing area residents, said he hoped to extend "an olive branch" to the institution and encourage it to scrap its plans indefinitely.

"Absent a settlement, the war in the courts will continue and fester," said Walden.

According to The New York Times, Judge Donna Mills recently ruled that the city wrongly gave away public parkland to NYU. Though her decision allows the college to move forward with one of the four towers planned, it would require NYU to get approval from the State Legislature to begin the remaining three.

Not everyone applauded the decision: An editorial published by Crain's New York Business called it "misguided." According to the article, the ruling hangs on Mills' contention that two parcels of land that are being used as parkland must be preserved as green space. The problem: The city never classified the strips as parkland at all.

"For a judge to declare a nonpark to be a park is to render the entire city map subject to the whims of the judiciary, opening future projects to a new line of legal attack," said Crain's, adding that if the ruling was upheld on appeal, it could actually deter the city and private sector from allowing empty properties to be used as parks or gardens for fear of losing the right to develop them later. This would, in effect, reduce green space, not preserve it as intended, the publication said.

NYU gives every indication that it will move forward with its first tower while appealing the parts of the ruling that block development for the three remaining towers.

"The reality is that NYU's plan won the support of the city's editorial boards, was overwhelmingly approved by the City Council, and was upheld by the courts in almost every respect," NYU spokesman John Beckman said in a statement acquired by The Huffington Post. He said the plan allows NYU to develop land it has "owned for decades," creating thousands of new jobs and allowing the institution to "maintain its edge as a top university."