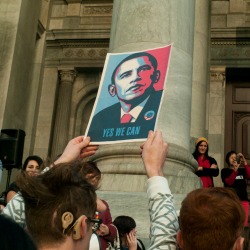 With the presidential elections a little over two months away, President Obama has turned his attention to a voter demographic that played an integral role in his 2008 success: American college youth. As the Republican Party announced its nomination of Mitt Romney as their presidential candidate last week, Obama traveled to various college campuses in Iowa and Colorado, urging them to exert their political influence and vote as enthusiastically as they did four years ago. USA Today reports how Obama addressed Colorado State University students last Tuesday with a speech that cast the Republican Party as disregarding the voice and vote of American youth. In this speech, Obama also represented himself as believing and investing in the potential and priorities of young Americans. “We’ve come too far to turn back now,” he told the campus crowd, “We’ve got more work to do.” According to The New York Times, Obama struck similar notes during his visit to the University of Colorado, Boulder this past Sunday, where he described his plans to further build upon the progress his office has made in the realms of health care and college financial aid.

Through his optimistic and motivational college talks, Obama hopes to garner the support of a population whose faith in him has faltered somewhat due to the grim 17.1 percent youth unemployment rate in America. In the 2008 election, Obama earned the support of 66 percent of voters ages 18 to 29. Today, 15 million American youth have become eligible to vote in a political climate that is significantly different than that of four years prior. College students have started to question the efficacy of Obama’s plans and policies to "fix" the United States economy, as illustrated in the title of an article the Colorado State student newspaper ran last week: “Where are the jobs?”

The above question has been one that both political supporters and opponents of Obama have been asking him consistently, ABC News reports. In an interview with KKTV, a Boulder, Colorado television station, Obama responded to a question about what grade he would give himself for his attempts to fix America’s longstanding economic problems and social needs. “I would say incomplete,” he said, “But what I would say is the steps that we have taken in saving the auto industry, in making sure that college is more affordable and investing in clean energy and science and technology and research, those are all the things that we are going to need to grow over the long term.”

"Obama Casts Republicans as Stuck in the Past," nytimes.com, September 2, 2012, Jackie Calmes