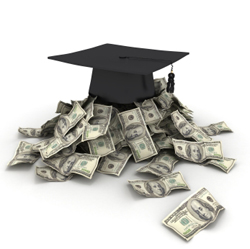 "Offering our children a world-class education isn't just a moral obligation, it's an economic imperative," Obama says, according to The Washington Post. "We've got to make sure that in good times or bad, our families can invest in their children's future and in the future of our country."

Obama says education is essential for growing the economy and competing globally, according to Bloomberg Businessweek. He wants America, by 2020, to have the highest proportion of college graduates worldwide. "There's an educational arms race taking place around the world right now--from China to Germany, to India, to South Korea," he says.

The American Opportunity Tax Credit (AOTC) was part of the 2009 economic stimulus legislation. It provides students as much as $2,500 a year for expenses, including tuition, books, and supplies. Families earning up to $180,000 a year are eligible for the tax break. Making the credit permanent would allow students to receive as much as $10,000 over four years. Funding the program for 10 years would cost $58 billion.

A Treasury Department report issued this week shows 12.5 million students took advantage of the tax credit last year, stated The Wall Street Journal. The average annual benefit was $1,736, which is 75 percent higher than that in 2008 ($986) with the two previous, similar, but less generous, programs--the Hope Credit and the Lifetime Learning Credit.

To fund the AOTC, administration officials suggest that lawmakers select from various new taxes on business and the wealthy, reported Bloomberg Businessweek. They hope legislators will address the credit when Congress returns to Washington following the Nov. 2 midterm elections.

Obama said the government should make it possible for children of all U.S. working families to attend college, according to First Read from NBC News. The president slammed Republicans' proposal to cut education monies, including financial aid for 8 million students, to partly fund tax cuts for the wealthy. "If Republicans in Congress had their way, that would be more difficult," he says. "They've proposed cutting back on education by 20 percent."

According to the Washington Post, the AOTC is "next big step" when it comes to college tax credits, says Gene Sperling, special counselor to Treasury Secretary Timothy F. Geithner. "Our hope is to get this extended in a way that's practical and timely, but we're not going to try to prejudge the congressional strategy for doing so."