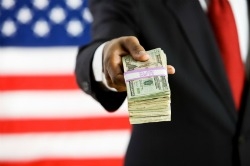 Speaking at the University of Michigan at Ann Arbor, President Barack Obama today proposed to have the government link federal financial aid to colleges' ability to control tuition costs and maintain value.

"We are putting colleges on notice: You can't assume that you'll just jack up tuition every single year," Obama said. "If you can't stop tuition from going up, then the funding you get from taxpayers every year will go down."

As reported by Bloomberg, the Obama administration is proposing to increase aid to colleges to $10 billion annually, up from $1 billion. About $8 billion of the money would go to Perkins loans for students, and the rest would be devoted to work-study grants and Supplemental Educational Opportunity Grants.

According to The New York Times, the proposal also calls for a $1 billion grant competition that would reward states that implement plans to keep college costs down. Another $55 million competition would go to colleges that increase their value and quality.

The Times also explained that the Obama administration wants to require colleges and universities to provide a "shopping sheet" for families that would make it easier to compare financial aid packages. The administration would also like institutions to provide graduates' earnings and employment information so that parents would be better informed about colleges' success rates.

While Obama's speech was well-received by about 3000 students at the University of Michigan, education leaders were skeptical about the president's proposals. Terry Hartle, senior vice president at the American Council on Education, told Bloomberg in a telephone interview that colleges and universities would likely resist the federal government's efforts to control tuition.

"The government would be telling you how you could price your product," he said. "Any industry would be unhappy with that idea."

Molly Corbett Broad, the ACE's president, agreed. "When we hear things like a shift in federal aid, it causes our antennas to go straight up," she told the Times. "Anything that smacks of price controls is of great concern on many levels, especially at a time when states are cutting their budgets -- and if the effect of this is to limit tuition, what else would you call it but price controls?"

All of the president's proposals would require approval from Congress, and as The Wall Street Journal pointed out, it is unclear how the plan would be received there. In the past, some have argued that increasing federal aid causes colleges to increase tuition.