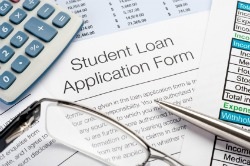 Speaking to a crowd of college students at the University of Colorado at Denver yesterday, President Obama announced a number of measures aimed at reducing the burden of federal student loan debt.

The new "Pay As You Earn" plan would allow recent graduates to consolidate their loans to receive lower interest rates. Obama estimated that about 5.8 million students could qualify for the benefit.

The plan would also allow borrowers in income-based loan repayment plans to reduce their monthly student loan payments from 15 to ten percent of their discretionary income beginning in 2012. Borrowers would also have the balance of their loans forgiven after 20 years, rather than 25 years as the current policy dictates. Obama's proposals expedite a plan that was approved by Congress in 2010 and was scheduled to first become available in 2014.

"Over the past three decades, the cost of college has nearly tripled," Obama said. "And that is forcing you, forcing students, to take out more loans and rack up more debt. Last year, graduates who took out loans left college owing an average of $24,000. Student loan debt has now surpassed credit card debt, for the first time ever. Living with that kind of debt means making some pretty tough choices when you're first starting out."

Most of those eligible for the lower monthly payments will be current students or recent borrowers whose incomes are too low to afford repaying student loans at the customary rate. For example, according to a White House fact sheet, a teacher $25,000 in debt and earning $30,000 a year will be eligible to have student loan payments reduced to about $114 a month.

Still, financial aid experts pointed out that the plan would do little to alleviate the present loan burden of recent graduates. "It's a step in the right direction, but a lot of people who need the relief right now won't be the ones who benefit," noted Mark Kantrowitz, publisher of Fastweb.com and Finaid.org, who was interviewed by The Huffington Post. "This plan doesn't do anything for a majority of distressed borrowers. It only helps those still in school."

Deanne Loonin, an attorney at the National Consumer Law Center who was interviewed by CBS News, agreed. "It definitely shows that the administration is hearing the voices of financially distressed borrowers," she said. "But the focus is more on students or student borrowers who have recently taken out loans--it doesn't provide relief for people who have prior loans or who are in default."

More significantly, some pointed out that interest rates on student loans are scheduled to double next July, which means that borrowers will once more be faced with escalating costs. "While the administration should get credit for what they've done," said Terry W. Hartle, senior vice president for government relations at the American Council of Education, who was quoted by the Chronicle,"the big issue for students will be the doubling of interest rates."