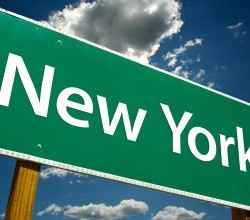 President Obama will embark on a two-day Northeastern bus tour next week to discuss higher education costs, The Hill reported. The tour will take place on August 22 and 23 and incorporate stops at three New York cities -- Syracuse, Buffalo, and Binghamton -- in addition to a stop at an undetermined town in Northeastern Pennsylvania. The President is also expected to visit universities in each of those towns.

According to White House spokesman Josh Earnest, during the tour, Obama will go over "some steps we can take to actually reduce the cost of a college education or at least reduce the rate at which it is rapidly growing." He will also "discuss the importance of ensuring that every American has the opportunity to achieve a quality education by reducing cost and improving the value of higher education for middle-class students and their families," a White House official told Democrat and Chronicle.

The Binghamton area in particular has been an historically popular location for politicians to visit. Former President Ronald Reagan had a re-election rally in Broome County in 1984, and Former President Bill Clinton stopped there in 2000 during Hillary Clinton's campaign for U.S. Senate.

Not many details about the President's visit have been released, although there is speculation that it will include a stop at Binghamton University. County Democratic Chairman Jim Testani stated that he's hoping the President will discuss the economy and the future of upstate New York.

As noted by the Poughkeepsie Journal, Obama has visited the region surrounding the state's capital three times during his presidency and has praised the achievements of the region's nanotechnology industry. During his visit to SUNY Albany's nanotechnology center in May of last year, he stated, "This school and this community represent the future of our economy. Right now, some of the most advanced manufacturing work in America is being done right here in upstate New York."

Obama's tour is happening during a time when the state's governor, Andrew Cuomo, is focusing on ameliorating the currently negative state of the upstate economy. In an effort to accomplish that goal, he launched Start-Up NY, an initiative that would implement tax-free zones for companies that establish locations close to college campuses.

While the President's tour plans have been well-received by many officials in upstate New York, Republicans oppose the tour, The Hill reported. Republicans stated that Obama is just reusing old policies and worry that the rallies would make it more difficult to reach a compromise on a fiscal deal. Earnest responded to Republican concerns, contending that the conservative party should be more in line with the President's goals for this trip. He told The Hill, "I would assume that Republicans at least in principle would agree with the president that a policy priority of the federal government should be making sure that a college education is both affordable and accessible to middle-class families."

The tour is meant to help shape the upcoming debate regarding the debt ceiling and federal budget. Congress must pass a government funding measure by September 30 in order to avert a federal shutdown and must also reach a deal for raising the debt ceiling.