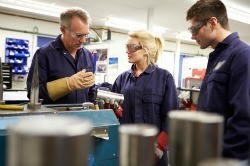 While the job market has improved in recent months, the issue of a skills gap remains for many companies. President Obama signed a bill into law Tuesday that will hopefully address this problem and work to resolve our nation's antiquated federal jobs training system. The bill, aptly named the Workforce Innovation and Opportunity Act, was created to streamline and update our already existing job training infrastructure while adding new opportunities, noted NPR. In a rare show of solidarity, the bill received support from politicians on both sides of the aisle.

"Folks in Congress got past their differences; they got a bill to my desk," said President Obama at the signing ceremony. "So this is not a win for Democrats or Republicans; it is a win for American workers."

Up until this point, workers signing up for federal job training programs have been confronted with a disjointed, dysfunctional system that doesn't always accomplish what it was intended to. In the past, its success has been measured on how many people sign up, with little attention paid to actual outcomes. According to NPR, the new law will put systems into place that will match newly-trained workers with jobs that require specific skills. The hope is that, by tailoring training to employer needs, more workers will transition from a life of struggle into full-time work.

According to The New York Times, the Workforce Innovation and Opportunity Act was created to diminish the unintentional bureaucracy created by the previous law by reducing duplicate programs and waste. The new law will also add another layer of accountability in helping states wisely spend federal money by requiring a "job-driven checklist" and offering specific tools to better inform job-seekers about their work opportunities. Meanwhile, the new law gives states more leeway with how they spend their funds -- a move that will let states tailor their programs to their economy and constituents.

Before the bill was signed into law, both the President and Vice President spoke on what they hope to accomplish with the Workforce Innovation and Opportunity Act and on the benefits of taking action now.

"To maintain our place in the world," said Vice President Joe Biden, "we need to keep the world's most skilled workforce right here in America, and to give a whole lot more hardworking Americans a chance at a good, middle-class job they can raise a family on."

According to WhiteHouse.gov, President Obama then went on to explain how the new law will bring federal job training programs up to date by tracking the progress of people who enroll and ensuring that a job is waiting for them once they finish.

"The bill I'm about to sign will give communities more certainty to invest in job-training programs for the long run," the President stated.

With so much division between the nation's most prominent political parties, this bipartisan effort was a welcome change for both Congress and the Obama administration -- so much so that, after signing the bill into law, the President reportedly seized the opportunity to congratulate those involved in the effort.

"Let's do this more often," said President Obama, according to The New York Times. "It's so much fun!"

"The First Significant Legislative Reform of Our Job-Training System in a Number of Years," whitehouse.gov, July 22, 2014, David Hudson, http://www.whitehouse.gov/blog/2014/07/22/preparing-americans-jobs-future