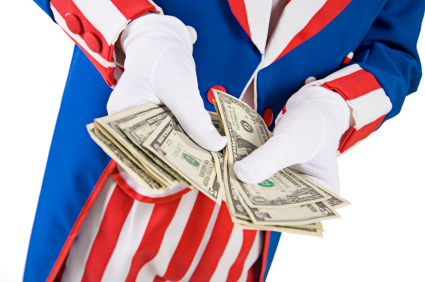 The Baltimore Sun reports that the proposal, which a White House official compared to "Cash for Clunkers," would grant businesses a tax credit of up to $5,000 for every new employee added to its workforce in 2010. The subsidy will be called the Small Business Jobs and Wages Tax Cut but will be available to businesses of any size. Yet small businesses are expected to receive most of the benefits because the limit will be $500,000 per company, and small businesses far outnumber large ones.

"Every single policy to help create jobs will involve a certain amount of rewarding people who are already creating jobs," explained the official, who was quoted in the Sun. "The president thinks that's a good thing, and he's happy to do that."

The announcement comes on the heels of a separate plan Obama proposed during Wednesday's State of the Union address to spend $30 billion providing more credit for small business owners. The money would come from funds that Wall Street firms paid back to the government after the bank bailout.

"Through sheer grit and determination," Obama said during his speech on Wednesday, "these companies have weathered the recession and are ready to grow. But when you talk to small business owners in places like Allentown, Pennsylvania, or Elyria, Ohio, you find out that even though banks on Wall Street are lending again, they are mostly lending to bigger companies."

Molly Brogan, a spokesperson for the National Small Business Association, told U.S. News & World Report that providing more credit to small businesses is "a good start, and it's something that we're very supportive of."

Small businesses, she said, are "not getting any kind of capital; they can't get financed. So moving these kinds of funds through community banks, which are some of the few banks that are still making character-based loans and are still lending to small businesses, just makes sense, in our opinion."

Others were less enthusiastic. "This is a good start. But it's a small start," said G. Michael Moebs, chief executive of the research firm Moebs Services, Inc., who was quoted in The Wall Street Journal.

The Journal explained that bankers are unlikely to increase loans until more consumers start buying. "The truth is small business is largely consumer-driven right now, and consumers aren't spending," said a bank executive, who was quoted by the Journal. "The biggest thing is to get jobs growing, which will increase consumer spending."

But many small businesses are reluctant to hire unless they are assured of profits, which is why some are questioning whether Obama's proposals will make any difference. "We are skeptical," said Bill Rys, tax counsel for the National Federation of Independent Businesses, who was quoted by The Washington Post. "Unless you have customers coming in the door, you're going to have less of a reason to hire."