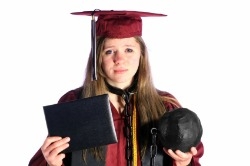 When President Obama visits the University of Colorado, Denver campus on Wednesday, he is expected to talk about ways to ease the loan burdens of students and graduates.

A couple hundred of Auraria campus students camped out overnight Monday to obtain one of 4,000 tickets to the event, reported The Denver Post. Obama is on a Western-state campaign swing that includes California, Nevada and Colorado.

"If the message is going to be about debt management, I think all of our students are very concerned about managing their debt and managing their higher education," Raul Cardenas, associate vice chancellor for student affairs at the University of Colorado Denver, was quoted in The Denver Post as saying.

One of the proposals the President is expected to advance is a special, income-based loan repayment program, according to CNN Money. Another is a program to encourage graduates with two or more types of federal loans to consolidate them into one and refinance. These ideas were initially presented by Obama during the budget proposals, but are expected to be re-visited during his trip.

Obama's announcement comes as pressure on the U.S. government has been mounting to address the financial issues of students and graduates, such as student loan debt and paucity of jobs, CNN Money reported. The average student loan debt for the 2009 class graduating from four-year nonprofit colleges was $24,000, which encompassed all private and federal loans, the Institute for College Access & Success statistics revealed. Furthermore, the jobless rate for college graduates aged 24 and younger rose in 2010 to 9.4 percent, the highest since the U.S. Department of Labor began recording it in 1985.

The proposal to accelerate the income-based repayment program builds on a change already to come, The Wall Street Journal noted. Currently, borrowers may limit their loan payments to 15 percent of their income, with all debt being forgiven after 25 years of payments. However, a change Congress already passed allows graduates, starting in 2014, to pay 10 percent of their income with all loans forgiven after 20 payment years. Wednesday, Obama is expected to reveal that the change will go into effect in 2013 rather than 2014.

This change could be particularly favorable for individuals with limited income. Monthly loan payments are based on any earnings above 150 percent of the poverty line, according to CNN. For a graduate living alone, this equates to 15 percent of any income made over $16,335. An unemployed person with no income would pay nothing. This is significant for students at risk for default. In 2010, the default rate rose to 8.8 percent, up from 7 percent in 2009, Department of Education data showed. About 500,000 students are currently enrolled in the plan, but hundreds of thousands more are eligible.

"We need to get the word out to students... that they need not default," Justin Draeger, president of the the National Association of Student Financial Aid Administrators, said to CNN Money.

With the other measure, students with loans issued by both private banks and the federal government could combine them into one government loan and refinance, lowering their income rate and monthly payments, The Wall Street Journal indicated. This allowance could affect approximately 5.8 million people.